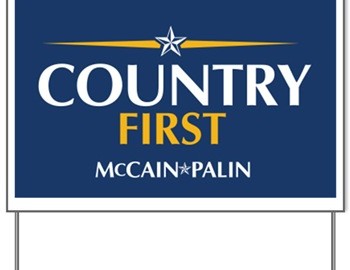 I’m continuously amazed at the subtle messages emanating from the 2008 Presidential Campaign. Republicans and Neo-Conservatives gleefully refer to Barack Obama as “A Community Organizer”, simultaneously belittling his experience and education. To many Black Men this is nothing but more of the same.

We (black men) especially those with a college degree and/or professional training face this implied incompetence everyday of our working and personal lives.

McCain’s “Country First” is that little bitty code word that insinuates that the Obama’s both Barack and Michelle harbor this “hate” of America.

Since the beginning of this Nation blacks, coloreds, Negros, whatever we’ve been called and called ourselves, were content with just being called Americans.

But after years of state sponsored terror against us, defining “Colored “as one drop of “Colored” blood classifying who and what you were. We (black folk) are expected to display the style and type of Patriotism prominently on display in an old John Wayne movie. White America and the Neo-Conservatives shouldn’t and can’t expect out of minorities the same patriotic fervor that accompanies the John McCain/Sarah Palin ticket.

In many cases our individual patriotism was snuffed out by well meaning educators and bigoted conservatives who felt “they” define patriotism and who is and who isn’t.

As a young student in Syracuse City Schools I recall being bussed from the minority rich 15th Ward neighborhood where I lived to the pristine Italian northside of Syracuse. At Salina School I remember a teacher, Mr. Dwyer who in a lesson described a class project which culminated with the reenactment of the signing of the Declaration of Independence.

There was to be a mock debate mimicking the Convention that preceded the actual signing with the classroom participating as Delegates. In your role as a delegate you were to give a little speech on your character as they were at that time in history.

I was excited to embark on what I saw as an adventure in how government worked and the process of the nations founding, and why black people at that time weren’t to be counted in the Census as a full human being.

The day came when I received my assignment, opening the envelop there was a name I didn’t know so I rushed to the textbook and found that I had been assigned a Pro-Slavery Delegate from Virginia. There must have been a mistake.

I asked the teacher and he confirmed the selection. I think as a child I spoke truth to power because I went to the principles office and asked why was I being assigned a pro-slavery delegate surely there were others that I could play.

The weekend passed and Monday morning came I was suddenly pulled out of Mr. Dwyer’s class, now in an echoing hallway I was told the following. “Mr. Jackson I don’t know where you get this from but buddy, you are American first and everything comes after that. You caused the principle to cancel the exercise that was to expose you to that time in history.”

I was then told to go back into the classroom.

It was time for the Pledge of Allegiance.