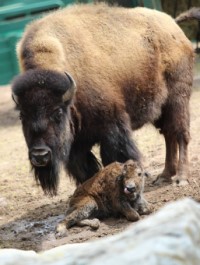 Syracuse, N.Y. – County Executive J. Ryan McMahon, II announced the birth of a baby American bison was born on exhibit at the Rosamond Gifford Zoo today, Thursday, May 9, while zoo visitors watched in awe. The mother bison, Sue, went into labor around 11 a.m. and the baby was born around noon.

The calf is the second bison baby to be born at the zoo to Sue and male buffalo Harley. Sue had their first calf, Abigail in 2017. This second calf will be named Madison as part of the zoo’s “I Love New York” theme of naming new arrivals after New York cities and towns. Animal care staff are not yet sure of the baby’s gender.

American bison once numbered in the millions, but bison came close to extinction by 1900, when only about 1,000 remained. Conservation efforts led by the Bronx Zoo have restored the population to about 500,000 in zoos, preserves and protected parklands. In 2016, the American bison was named the US National Mammal.

Onondaga County Executive Ryan McMahon said the birth represents another achievement for the zoo. “Our zoo is doing great things to help save endangered species, and this bison calf is one more success story,” McMahon said. “My congratulations go out to zoo leadership, the animal care staff and the Cornell University Veterinary team that assists in medical care at the zoo.”

“With this second bison birth, we are doing our part to contribute to the health of this species,” said Zoo Director Ted Fox. “It is a great experience to participate in the conservation of this iconic animal.”

With several school field trips visiting the zoo Thursday, a small crowd gathered at the bison exhibit as onlookers realized an animal was giving birth. Zookeepers stood by observing from several vantage points, while a couple of keepers answered visitors’ questions.

Several visitors referred to the bison as “buffalo,” but only bison are native to North and South America as well as Europe. Many people confuse the two species of hoofed mammal, but buffalo only reside in Africa and Asia, Fox said.

The birth comes just in time for Mother’s Day, which the zoo is celebrating by offering $1 admission for mothers AND fathers this year.

The Rosamond Gifford Zoo participates in several Species Survival Plans for breeding endangered animals in human care through the Association of Zoos & Aquariums (AZA). It is one of 233 institutions accredited by AZA, which requires its members to meet the highest standards of animal care, wildlife conservation, education and guest experience.

For information on the zoo, visit www.rosamondgiffordzoo.org. For info on zoo events, visit www.syracusezooevents.org.