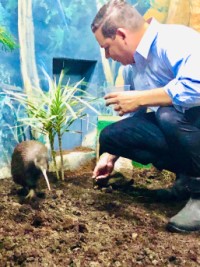 One of only eight zoos able to care of this species

Syracuse, N.Y. – Onondaga County Executive Ryan McMahon unveiled the newest resident of The Rosamond Gifford Zoo, Eustace! Eustace is a Kiwi which are large, flightless, nocturnal species of bird found only on the island of New Zealand. Eustace is a North Island Brown Kiwi to be exact.

The 16-year-old male Kiwi arrived at the zoo September 16 from the Franklin Park Zoo in Boston and has been in quarantine behind the scenes. Onondaga County Executive Ryan McMahon came to visit the bird and Eustace will now be on view in the Nocturnal Animals wing of the zoo’s Animal Adaptations area.

Eustace represents a species that has experienced deep decline in its native habitat in New Zealand, where the Kiwi is revered and considered a cherished charge of the native Maori people. The Kiwi is the national bird of New Zealand, and New Zealanders refers to themselves as “Kiwis.” The bird is also listed as vulnerable due to predation by human-introduced animals such as rats, weasels, cats, dogs and pigs, which have threatened the survival of Kiwis and their eggs.

Onondaga County Executive Ryan McMahon congratulated the zoo on becoming only the eighth zoo in the United States to be able to care for this species.

County Executive McMahon said, “This shows once again that our zoo is one of the best and most respected zoos in the country. Only the most trusted institutions with the most experienced staff are able to have Kiwis. To have such a unique animal right here in Central New York is a very special thing.”

Zoos that care for Kiwis must agree to many mandatory regulations before they can acquire them. There are five species of Kiwi in New Zealand and all are considered sacred by the indigenous Maori people. Zoos allowed to keep them must collect the feathers when the Kiwi molts and send them back to New Zealand to be “repatriated” and given to Maori tribal leaders to be used in traditional Maori weaving.

The zoo also was required to have several staff members trained to care for and handle Kiwis.

Zoo Director Ted Fox said the zoo’s General Curator, Dan Meates, and his wife, zookeeper Leisje Meates, both have prior experience with Kiwis, which assisted the process of being able to acquire one at the Rosamond Gifford Zoo.

In addition, the zoo was required to send the two main bird care staff who would work with the Kiwi to train at to the National Zoo in Washington, D.C. The two zookeepers who went for the Kiwi training are Birds Collection Manager April Zimpel and bird keeper Ryan Shostack.