When Onondaga County Legislator Charles Garland 16th District was sworn in, the newly minted Legislator hit the ground running. There are many issues facing the 16th Legislative District which he represents. From the beginning he pledged to work on behalf of the people living in the 16th District. Already, he’s informing his constituents of meetings, he’s identified issues that he’s become aware of as a member of the Onondaga County Legislature. Asking for feedback, which he then will use to stake out his position on the legislature.

Garland has been passionate about his role as a legislator, embarking on factfinding missions by attending meetings of various community groups. Has also been steadfast in bringing issues before the community. Sending regular emails, being a conduit for information, as he shares what he’s doing as a legislator. As a Syracuse political leader, he’s been different. Instead of blindly following his Democratic Caucus, which is clearly against the aquarium project at Syracuse’s Inner Harbor; Garland is in discussions to bring additional Onondaga County resources into the South Side. 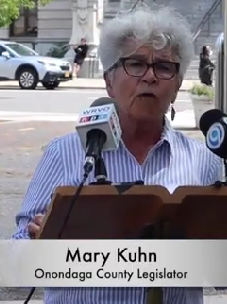 There’s a lot of discussion about, “what to do with the money?” As community groups and a plethora of individuals sent a letter to the County Executive demanding more assistance for the poor. County Legislator, Mary Kuhn held a press conference where she, along with those gathered in opposition to the Aquarium project. At the event Kuhn made the case that we have large numbers of people living in poverty stating, “we can use these funds to address poverty in our community. Syracuse is one of the poorest communities in the nation, we don’t need an aquarium.” Kuhn’s plan calls for Onondaga County to replicate the Federal Government’s Child Tax Credit by giving county funds directly to the poor.

Garland hasn’t publicly announced how he’ll vote on the Aquarium project. However, as details of negotiations emerge, it looks like a deal in the making.  According to Garland, “We all know he needs 9 votes. With the county legislature, there are 17 legislators 11 of them are Republicans. So, at any moment that could all be swayed, and they could all vote yes. So, we had a window of opportunity. It’s all about leverage. What we discussed, we met with him, we gave him a list. It was a large list, we talked about Housing, we talked about lead abatement, we talked about jobs, we talked about air quality, a whole lot of things. “

In addition to the above, according to Garland, progress was made with the Syracuse City School District regarding Asbestos Removal certification training. They’ll offer a class that can possibly make them employment ready. The list of “requests” are as follows. (To view the interview on mobile devices click Urban CNY News Youtube Channel)

This wide-ranging interview touched on several topics of interest to the Southside Neighborhoods. Garland takes time to discuss pending issues before the legislature.

This is in addition to what we asked for and were given:

1. $10 million Housing Initiative for contractors and developers (to be ongoing). At first we thought it was going to be for just the 16th.

2. $3.7 million for Lead Abatement. Does not include plumbing. They said theirs is a Federal program for plumbing.

4. $4.1 million grant from the Restoring Communities Initiative for The Castle. The money is for existing buildings. There will be more money for other targeted buildings in the 16th.

5. I reached out and met with Carl Hummel, the SCSD and directors of the Fowler PSLA program in 2019-2020 to suggest a partnership with the Syracuse City School District CTE trades programs and the County because my Electrical instructor, Chet Brosztek, an instructor at WEP told me they need to hire people. Then McMahon said there was no workforce to remove lead. I arranged and agreement between the school district and county to add a Lead Abatement Module to the construction trades at Fowler PSLA serving 1,800 students in 28 career pathways. These students will be certified in Lead Abatement. The school district is partnering with known contractors (including minority ones) to hire these kids to do lead abatement, giving them hope, a living wage and reason to stay in Syracuse. It will also encourage the kids following them, that there is a pathway.

6. Guaranteeing a certain percentage of MBWE’s and minority workers on County projects and putting graduates of Syracuse Build directly into jobs. Also, for minority contractors and service providers mot registered as MWBE’s of DEE’S to be able to bid on these projects.

7. Addressing the “Spatial Mismatch” of all these newly created jobs in the suburbs Amazon Liverpool and Kirkville and the massive proposed White Pines and minority workers in the city. They directed Rob Simpson of CenterstateCEO to do a study to see how many inner-city workers have been hired at these jobs. I’m waiting for the results.

8. $4.5 million for our Southside Housing Initiative to build houses in the many vacant lots and where abandoned houses are. Developers other than Housing Visions will have the opportunity to bid on building the housing. We wanted homes for the families who will be displaced from public housing and realize we have to start building now.

“We cannot wait for the Republicans to flip their votes and lose out on everything. We can only have so many moral victories in our losses.” – Charles Garland