Syracuse, NY – This week, Dana Balter for Congress launched a new TV ad, setting the record straight on John Katko’s attack ad that falsely alleges that Dana Balter is “dangerous.” In response to Katko’s ad, Balter makes clear that she doesn’t support raising taxes on working families or letting violent criminals go free. Balter criticises Katko for emulating Donald Trump by using lies and fear to divide us. Balter concludes by committing to voters that she’ll work to bring people together as the Congresswoman from New York’s 24th district. 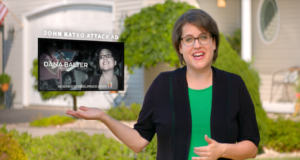 Dana Balter kicked off the general election at the end of last month in a strong position. Shortly after the primary, a new poll released by the DCCC, showed Balter beating Rep. Katko by 3 points, 48% to 45%. The Cook Political Report, a nonpartisan election forecaster, took note of the polling and moved the rating of NY-24 in Balter’s favor. Less than a week after the primary, Balter was added to the DCCC’s Red to Blue program. Just last week, the Washington Post listed NY-24 as one of the top 10 races most likely to flip in November.