The spot can be viewed on YouTube by clicking Here to view Dana Balter for Congress television commercial.

Balter’s ad, titled “Stand Together,” features the candidate talking about her background as an educator and advocate, and calling on voters to stand together against bullies like Donald Trump. The candidate’s brother Jonathan appears, along with nearly three dozen local supporters. 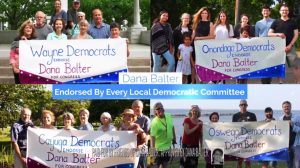 The ad closes with a montage of photos featuring volunteers from all four counties in the 24th District, and her endorsement by every local Democratic committee in the primary.

The initial buy will run through June 11th.