It was a crisp Saturday morning in September on South Salina Street at Sankofa Park where Dana Balter was preparing to canvass the heavily Democratic area of the city. It’s in the middle of the 4th Council District, which extends from the Westcott Street area through the Southside almost to, “the Valley”. The 4th also includes some new residents from fast growing residential properties in downtown Syracuse. This is just one of many areas within the City of Syracuse where turnout can determine the outcome of the 24th Congressional District race in November.

Nodesia Hernandez, Balter’s Campaign Organizer soon arrived, as they prepared to embark on their morning of canvassing, two surprise guests appeared. Former Syracuse Mayor and SAM* Candidate for Governor, Stephanie A. Miner and husband, Jack Mannion stopped by to wish Balter well, as she began her busy morning of campaigning.

Hernandez and Balter, then reviewed detailed street lists of voters and crossed Salina St. to Wood Ave., within minutes Dana was in campaign mode. After introducing herself, Balter asked “Andrew” about his life, his job, what concerned him as a voter. Andrew talked about his job, which he likes, the stagnation of wages, his children and training to qualify for employment at a better wage.

Rather than shake his hand and walk away, Balter wanted more. She listened patiently to Andrew before walking to the next address on the list. 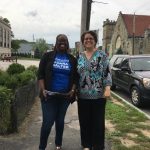 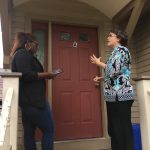 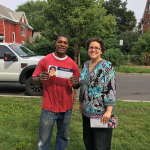 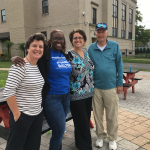 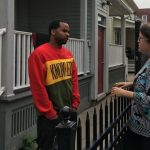 Dana Balter speaks with Andrew, a South side resident 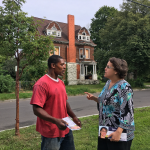 The next address, no answer, the candidate writes a brief note and leaves a handout detailing her positions in contrast to her opponent, incumbent Republican John Katko.
Next door, Elliot is leaving his home heading for the car. “Excuse me; let me introduce myself, I’m Dana Balter.” The next 10 minutes became an intense conversation about self-employment. Elliot is a residential contractor, “Healthcare, even for basic coverage is expensive”, he stated. Explaining, while he doesn’t get sick or go to the doctor regularly, “it’s just expensive” he repeated, in an exasperating tone.

An African-American woman is passing as the conversation ends, Nodesia Hernandez, Balter’s Campaign Organizer engages in a conversation. The woman is clearly aware of the upcoming election, and may have even marked her calendar, “I know the election’s coming and I’m ready” was her response talking as she continued her way, walking east on Wood Ave.

From the first few encounters on Syracuse’s Southside, it’s clear that there’s an awareness of the upcoming election. However, in order to secure a victory in November, areas like the City of Syracuse will have to show up in numbers equal to a Presidential Election year in order for Democrat, Dana Balter to overcome Republican strength in the rural and suburban areas of the Congressional District.

The 24th Congressional District includes Cayuga, Onondaga, and Wayne counties, and the western part of Oswego County, Syracuse is its largest city.