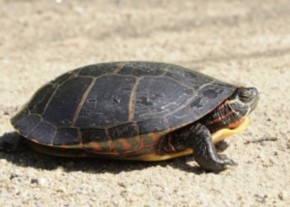 DEC Advises Motorists to Be Alert for Turtles Crossing Roadways

The New York State Department of Environmental Conservation (DEC) today reminded the public that the state’s native turtles are on the move in May and June, seeking sandy areas or loose soil to lay their eggs. Drivers that see a turtle on the road should use caution—not swerve suddenly or leave their lane of travel–and take care to avoid hitting turtles while driving.

In New York, thousands of turtles are killed each year when they are struck by vehicles while migrating to nesting areas. New York’s 11 native species of land turtles are in decline, and turtles can take more than 10 years to reach breeding age. The reptiles lay just one small clutch of eggs each year, which means the loss of a breeding female can have a significant effect on the local turtle population.

This time of year, it is especially important to be on the lookout for turtles and to drive cautiously, particularly on roads near rivers and marshy areas. If a turtle is spotted on the road or near the shoulder, drivers should safely stop their vehicle and consider moving the turtle to the side of the road in the direction the reptile is facing. Drivers should only stop and move turtles when it safe to do so and should never put themselves, their passengers, or others at risk.

Most turtles can be picked up by the side of their shells. Do not pick up a turtle by its tail. Picking the turtle up by its tail may frighten or injure the reptile.

It’s important to use extreme caution when moving snapping turtles; either pick the turtle up at the rear of the shell near the tail using two hands, or slide a car mat under the turtle to drag the turtle across the road. Do not take native turtles into personal possession. All native turtles are protected by law and cannot be collected without a permit. Snakes can sometimes also be seen crossing or basking on the road. If safe to do so, please slow down and steer around them.

For more information on protecting turtles and other reptiles, visit DEC’s website.  Read more about turtles in the June issue of DEC’s The Conservationist magazine.  Don’t miss out–subscribe today. Call 1-800 678-6399. View the new digital issue at The Conservationist webpage.