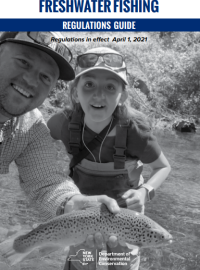 “New York waters offer excellent muskie fishing opportunities and DEC is committed to sound management of this charismatic predator,” said Commissioner Seggos. “Muskies are the largest freshwater sportfish in New York and many of the high-quality muskie fisheries in the State’s inland lakes and rivers are products of the State’s sustained investments and successful stocking programs. I encourage all New York anglers who seek a truly unique trophy fishing experience to give muskie fishing a try and find the time to enjoy the tremendous fishing opportunities that can be found here in New York State.”

Often referred to as the “fish of 10,000 casts,” muskellunge are the top predator in waters they inhabit and are legendary for their ability to challenge and confound anglers. Combined with the potential for massive size, sometimes exceeding 50 pounds, and a well-earned reputation as a powerful fighter, the challenge of landing an elusive muskie has inspired many anglers to forsake other fish in their pursuit.

The St. Lawrence River, Upper Niagara River, and Chautauqua Lake are popular hotspots for trophy muskies. Other quality muskie waters include Waneta, Greenwood, Bear, and Cassadaga lakes and the Susquehanna, Chenango, and Great Chazy rivers. In all, there are at least 13 lakes and 19 rivers that have muskellunge populations in New York State. Muskellunge are managed as a trophy fish in New York, and minimum size regulations of 40 inches for inland waters and 54 inches for Great Lakes waters reflect that status. Review the Department of Environmental Conservation’s (DEC) Freshwater Fishing Regulations Guide for more information. 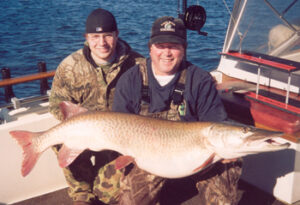 For tips on how to catch muskies, visit the DEC website to read Muskie 101. Given their elongated body structure, members of the Esocid family (muskellunge, tiger muskellunge, northern pike, chain pickerel) are susceptible to strain on their internal organs if held in a vertical position. DEC reminds anglers to handle fish horizontally if they plan to release these species.

Muskellunge fisheries in New York State are managed through habitat protection and enhancement, research and monitoring, stocking, and fishing regulations. Every spring, DEC staff collect eggs from Chautauqua Lake muskellunge, incubate the eggs and raise the muskie fry at the Chautauqua Lake Fish Hatchery until the fingerlings reach about nine inches in length, and stock the fish in October. Visit DEC’s website on Muskellunge Management in New York State for more information.

In 2021, the State’s goal is to produce 26,000 muskies for stocking in 16 waters across New York. Great Lakes muskellunge populations are self-sustaining, but concern over a recent decline in the St. Lawrence River population resulted in the implementation of an experimental stocking program to help the population recover. DEC and the SUNY College of Environmental Science and Forestry are collaborating on this effort.

To improve public safety and encourage visitors to State-owned and managed lands to practice responsible recreation, DEC recently launched the “Love Our New York Lands” campaign. The campaign is responsive to the steady increase in the number of visitors to state lands, both during the COVID-19 pandemic and in the decade prior, as more and more New Yorkers and visitors from other states and countries discovered the natural beauty of New York State lands, particularly the Adirondack and Catskill parks. The campaign bolsters ongoing State- and partner-led efforts to educate the public about how to responsibly enjoy outdoor recreation on public lands without negatively impacting natural resources. The campaign will implement a variety of multi-media and in-person strategies to promote Leave No Trace™ principles, hiker preparedness and safety, sustainable use, and responsible trip planning, as well as reinforce the role of DEC professionals who protect public lands and manage public access, including DEC Foresters, Natural Resource Planners, Forest Rangers, Assistant Forest Rangers, and natural resource stewards. For details and more information, visit the Love Our New York Lands webpage at on.ny.gov/LoveOurNYLands.