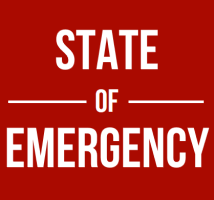 This is an extension of the original State of Special Emergency issued by the Mayor on May 31, 2020. While there’s no curfew at this time, having this extension gives the city of Syracuse flexibility to implement a variety of actions including a curfew, if that becomes necessary.

WHEREAS, on May 30, 2020, an outbreak of civil unrest and
disturbance occurred within the City of Syracuse as a reaction to the death
of George Floyd during his detention by the Police Department of the City of
Minneapolis, Minnesota on May 25,2020; and

NOW, THEREFORE, I, Benjamin R. Walsh, Mayor of the City of
Syracuse, by virtue of the authority vested in me by the City Charter and
applicable laws, hereby finds, pursuant Section 24 of the New York
Executive Law, Article II, Section 11-26 of the Local Laws of the City of
Syracuse, and Article 17, Section 16-58 of the Revised General Ordinances of
the City of Syracuse, that the conditions requiring the May 31, 2020
declaration of a State of Special Emergency continue, and that the ongoing
civil unrest remains a threat to the maintenance of law and order or
endangers property, life, or the safety and welfare of the citizens of the City
of Syracuse, and that certain emergency measures authorized by law to
protect life and property and to bring the emergency situation under
control are necessary, and I do hereby declare that a state of special
emergency within the City of Syracuse does and shall exist.

This extension of the Declaration of a State of Special Emergency shall
remain in effect for thirty days, unless earlier terminated or extended by
subsequent act of the Mayor.

Given under my hand and the Seal of the City of Syracuse this fifth day of June in the
year two thousand twenty.