The evening was ripe with nostalgia as the Onondaga County Democratic Committee celebrated on April 16th by honoring democrats. This annual occasion is where individuals are recognized for the work they’ve done for the party.

Bitter sweet, as Lifetime Achievement awardee David Moynihan recently passed away. His wife and daughter accepted the award on his behalf.  Mr. Moynnihan was honored not only for what he’s done for the Democratic Party, recognition for time he’s contributed to countless organizations and individuals. 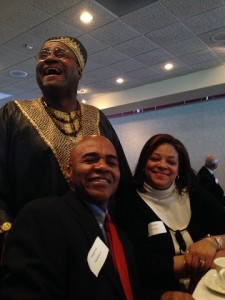 Special Honors went to local “griller-extraordinaire” John John Williams, III. You may have seen his traveling democratic-lawn-sign truck. Williams has worked for Democratic Party candidates in addition to providing a catering service. John John is passionate about getting people out to vote especially “new Americans”.

2015’s Democrat of the Year, Tim Carroll gave an inspirational speech introducing his grandson to the audience as an example of young people getting involved with politics. In addition, he mentioned Mayor Miner’s efforts to bring young people into city government.  For Carroll, it started in 1968 when at 14 he volunteered for Hubert Humphrey’s presidential campaign.  Since then, Tim Carroll has played key roles in several administrations serving in the administrations of Mayors Thomas G. Young, Matthew J. Driscoll, and Stephanie A. Miner. He’s the architect of the “Dunk Your Junk” campaign to clean up litter in Syracuse.  When he wasn’t working for an administration, Tim Carroll was busy coordinating local campaigns for a variety of candidates including, Bill Clinton, Andrew Cuomo among others.

Chair’s recognition award went to Teamsters 317. If you’ve ever wondered where those phone calls for the party originate, most likely it’s a union phone bank.

Those honored at the April 16th Empire Room Ceremony include: