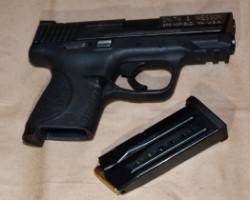 Town of Clay, New York – The Onondaga County Sheriff’s Office reports that Sheriff’s Deputies have charged a Town of Clay man along with a juvenile after fleeing from traffic stop with loaded handgun.

Last night at approximately 10:16 p.m., while on patrol in the northbound lane of Oswego Road near Belmont Drive in the Town of Clay, a deputy observed a Ford Five Hundred operating in violation of several NYS Vehicle & Traffic Laws. The deputy conducted a traffic stop and upon speaking with the two occupants, the deputy could smell the odor of marijuana coming from the vehicle. As the traffic stop progressed, the operated sped off into a nearby apartment complex. Deputies pursued the vehicle and it eventually came to a stop at the dead end of Grampian Road, where the occupants were taken into custody. A search of the vehicle was conducted which revealed various amounts of illegal drugs, including cocaine, several packets of heroin, and a small amount of marijuana. In addition to the drugs, over $2,500.00 in cash was located along with a loaded Smith & Wesson 9mm gun.

The driver, 22-year-old Diamond Jones and his 16-year-old male passenger, both of Liverpool, were charged with criminal possession of a controlled substance in the 3rd, 4th and 7th degree, criminal possession of a weapon in the 2nd and 3rd degree, and unlawful possession of marijuana in the 2nd  degree. In addition to these charged, Jones was also issued several traffic tickets to include the charge of aggravated unlicensed operation in the 3rd degree. He is currently being held in the Justice Center and is expected to be arraigned this morning. The 16-year-old male was lodged at the Hillbrook Detention Facility and is expected to be arraigned this morning in Youth Part.

Deputies were assisted at the scene by members of the New York State Police.