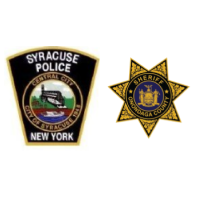 On June 7th, at approximately 10:10 P.M. Syracuse Police Officers responded to a residence in the 200 block of Clarence Avenue for a verbal domestic involving a mother and her 14-year-old son. During the investigation, the 14-year-old grabbed a kitchen knife and fled from the residence. Prior to fleeing, the teen made suicidal statements to also included suicide by cop.

Officers located the armed teen, who was armed with a knife, in the side yard of a residence in the 100 block of Roney Road. Crisis Negotiators were called to the scene. Officers and Crisis Negotiators attempted to engage in conversation with the teen and gave him multiple orders to drop the knife. Continued efforts were made to de-escalate the situation to include assistance from Sheriff’s Deputies with the deployment of less-lethal force in a form of a 12-Gauge drag stabilized bean bag round.

At one point, the teen made comments about the police ending his life and began to approach officers with the knife. As a result, a deputy deployed the less lethal bean bag round which proved effective with only minor injuries. Officers quickly moved in and took the teen into custody without further incident. The teen was medically evaluated at the scene by AMR Ambulance and transported to St. Joseph Hospital for further treatment.