City of Syracuse, New York- The Onondaga County Sheriff’s Office reports that deputies are seeking the driver of a stolen vehicle that crashed into a downtown building last night in the City of Syracuse.

On Monday night at approximately 10:05 P.M., a sheriff’s deputy patrolling in Mattydale, observed a vehicle travelling south on Brewerton Road, which had been recently reported stolen to the Syracuse Police Department. The deputy attempted to stop the stolen Hyundai sedan; however, the male driver refused to pull over and continued to travel through the north side of Syracuse. With the assistance from Air1, the flight crew monitored and relayed the vehicles direction of travel to the ground units. As the vehicle was attempting to turn right onto South State Street from westbound East Fayette Street, the driver lost control and struck an apartment building. 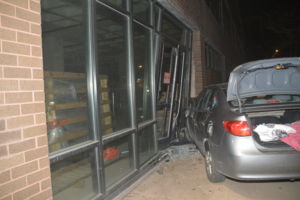 The collision caused significant damage to the vehicle and the buildings storefront. The driver fled on foot as deputies took the passenger into custody. The passenger was identified as Preston Fagan (23) of Syracuse. Fagan was charged with criminal possession of stolen property in the 4th degree and unauthorized use of a motor vehicle. He was released on an appearance ticket and is scheduled to appear before a judge at a later date.

Deputies, along with the assistance from officers with the Syracuse Police Department, searched the surrounding area for the driver but were unable to locate him.

Deputies continue to investigate the incident. Anyone with information on the driver’s identity or whereabouts is asked to call the Sheriff’s Office Tip Line at 315-435-3051.