On Sunday morning at approximately 1:20 A.M., deputies responded to a loud noise complaint reported in the parking lot of the Norstar apartment complex located off Henry Clay Blvd. When deputies arrived, they discovered two males standing next to a vehicle that was occupied by three males who were blaring music from it. As deputies approached the vehicle and began speaking with the men, they observed a muzzle of a long gun protruding from underneath the vehicle. 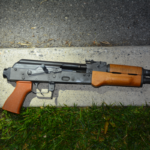 Confiscated Gun (one of two) 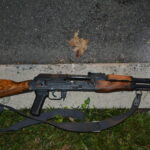 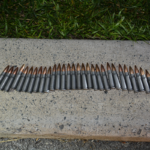 The gun, an AK47 assault rifle, was quickly recovered from underneath the vehicle and was discovered loaded with 30 rounds. A subsequent search of the vehicle revealed a second AK47 assault rifle. Deputies arrested and charged the following individuals with criminal possession of a weapon in the second, third and fourth degree; Brandon Dobbs (35) of Rome, Ronnie Hordge Jr, (23) of Utica, Ferris Bell (35) of Utica, Dwight Jackson Jr ,(30) of Utica, Nyair Holloman (23) of Atlanta, Georgia.

All five were arraigned Sunday and are currently being held in the Justice Center.