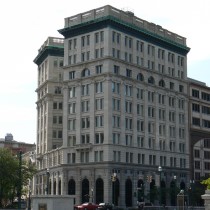 Syracuse, N.Y.; Jan. 21, 2020 – M&T Bank today announced that it has entered into a contract to sell its property at 101 South Salina, Syracuse N.Y. to Douglas Development Corp., a Washington, DC based real estate developer noted for bringing new life to iconic buildings. Douglas Development is currently redeveloping several buildings in downtown Buffalo, including the city’s tallest building, known as Seneca One, into commercial space and residential units.

Douglas Jemal, principal of Douglas Development, said he plans to create a mix of apartments and ground floor retail, with the specifics to be worked out once he takes ownership. The sale is expected to be completed in the second quarter of this year.

“This gorgeous building near Clinton Square sits at the heart of the city’s center, and we intend to return it to glory, and to help contribute to the rejuvenation that’s happening in downtown Syracuse,” said Jemal.

The 10-story office building was one of Syracuse’s first steel frame structures, built in 1897. It’s uniquely comprised of three separate, yet conjoined buildings and is in the Hanover Square Historic District, an area known for summertime entertainment and is listed on the National Register of Historic Places.

“Douglas has decades of experience thoughtfully preserving and remaking large, historic buildings like ours with truly revolutionary results,” stated Allen Naples, Central New York Regional President for M&T. “He doesn’t look at a property and do a quick financial analysis. He looks at it and sees it in the context of the neighborhood and its potential to serve as an anchor establishment many years into the future. We’re confident Douglas will create a space that contributes to the live-work-play atmosphere that our community has been cultivating downtown.”

M&T plans to relocate its Central New York regional headquarters and Salina Street Branch to 250 S. Clinton St., a prominent downtown office building, in the third quarter of 2020. The new office and branch location will be less than one mile from its current location at 101 S. Salina St.

“M&T Bank is reaffirming its commitment to Downtown Syracuse by locating its new Central New York regional headquarters at 250 Clinton Street. M&T and its people are a big part of our center city, and we are thrilled they are staying right in the neighborhood,” said Syracuse Mayor Ben Walsh. “Just as important, M&T is showing its support for the City by ensuring that there is a vision and path forward for its iconic building on Salina Street. We look forward to Douglas Development’s presence in Syracuse and its investment in a Clinton Square landmark.”

“As we prepare to move, we are excited about all the benefits that our new location will provide for our teams,” added Naples. “Our people are the most important part of our success, and supporting them in the meaningful work they do every day is our top priority.”

The six-story, 180,000-square-foot building, of which M&T Bank will occupy the entire fourth floor for office space and 2,800 square feet on the first floor for branch space, means room for growth and an open floor space that improves efficiency and makes it easier for the local team to work together to serve clients.

The new branch at 250 S. Clinton St. will feature the same welcoming staff and an extensive array of consumer and commercial products and services, as well as an onsite expert in small business and SBA lending. There will also be a 24-hour ATM vestibule available to customers after branch hours.

M&T will invest approximately $7 million to renovate both spaces, as well as upgrade them with the latest in technology, furniture and equipment.

“It’s our goal to make this transition as smooth as possible for all of our customers,” said Heather Reed, South Salina Branch Manager for M&T. “I am confident that the established South Salina team will offer the downtown community the same great service they found here before.”

More than 140 employees work at M&T’s regional headquarters. The bank has 45 offices and employs nearly 500 people in its Central New York region, which includes Onondaga, Cayuga, Oswego, Madison, Herkimer, Jefferson, Lewis, Oneida and Seneca Counties. It is one of the top small business lenders in the region and holds the largest share of deposits in Syracuse.

Over the last 25 years, M&T has invested more than $30 million to support thousands of charitable organizations in the region, and just this past year, its employees reported volunteering 9,000 hours at 150 local organizations.