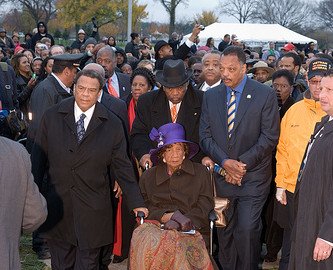 “If we assume that life is worth living and that man has a right to survival, then we must find an alternative to war. In a day when vehicles hurtle through outer space and guided ballistic missiles carve highways of death through the stratosphere, no nation can claim victory.” M.L.King,Jr.

I don’t like speculating on what someone would have said that is no longer with us. But I can’t help but wonder as we hear rants from the right giving justification for this war in Iraq. What would Dr. King have done?

Would there be some kind of March? What would he have said? Would he be revered like Nelson Mandella? Or reduced to being chuckled at like Jessie Jackson?

Dr. King’s already spoken about war. This war is no exception. While the Vietnam War was about American policy in southeast Asia. The Iraq War has people in this country split down the middle depending on what poll is taken and the slant of the question.

After September 11th 2001 Americans were justifiably angry. Saddam Hussein was a tyrant and dictator long before the attacks on our homeland. President Bush, Dick Chaney, Condoleeza Rice, Colin Powell, Don Rumsfeild and the intelligence community convinced us that danger was at hand. We had to act now.

Resulting in a war with over 3,000 deaths and thousands of injuries, some have countered with the argument that 3,000 lives lost aren’t very many when you look at the Iraqi Freedom operation. Over 150,000 were committed to the mission of toppling the “Butcher of Baghdad”. But how many other “butchers”, “Tyrants” and “despots” have we propped up? How many times have we had to fight against weaponry we once sold to a “friendly” government?

Dr. King was clear about war and hate, love and peace. He challenged us to do better, to be better.

“A true revolution of values will lay hands on the world order and say of war: ‘This way of settling differences is not just. This business of burning human beings with napalm, filling our nation’s homes with orphans and widows, of injecting poisonous drugs of hate into the veins of peoples normally humane, of sending men home from dark and bloody battlefields physically handicapped and psychologically deranged, cannot be reconciled with wisdom, justice and love. A nation that continues to spend more money on military defense than on programs of social uplift is approaching spiritual death.” – M.L.King,Jr.

In the years since King’s death, American history is already losing the reality of the man and his legacy. King has been altered like a philosophical Michael Jackson, his progressive ideology bleached, his increasing militancy clipped. Most of America remembers the King of the “I Have A Dream” speech, delivered in 1963, almost five years prior to his death. The media has created a new entity, someone Jesse Jackson has called “the harmless dreamer”. Both that image ignores the message King delivered in the last five years of his life.

In relation to the 1963 speech, America has made some progress on King’s dream. But at holiday time, we only hear about the dreamer, resulting in a watering down of King and misappropriation of his legacy. King didn’t stop speaking when that speech was over, and before his death he delivered many other speeches on America’s condition, not all of them so idyllic.

King spent his remaining years devoted to not just civil rights, but to human rights-including decent wages, since income gaps between the rich and poor were huge. Following the death of Malcolm X and King’s realization that the problem is global, his focus switched to wealth and power. Gone were the references to simply the black or “Negro” problem; the message became one of class struggle, and King reminded America that most Americans who lived below the poverty level were white.

“White America must realize that justice for black people cannot be achieved without radical changes in the structure or our society,” King wrote. “When millions of people have been cheated for centuries for centuries, restitution is a costly process. Inferior education, poor housing, unemployment, inadequate healthcare- each is a bitter component of the oppression that has been our heritage. Each will require billions to correct.

“Justice so long deferred has accumulated interest, and its cost for this society will be substantial in financial as well as human terms. This fact has not been firmly grasped, because most of the gains of the past decade were obtained at bargain rates. The desegregation of public facilities cost nothing; neither did the appointment of a few black public officials.”

Dr. McDreamy or Drum major for peace? You know the answer.