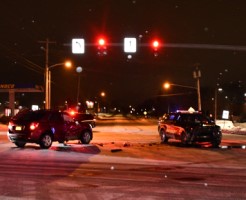 Town of Salina, New York – The Onondaga County Sheriff’s Office reports that a Liverpool woman has been charged with DWI after crashing her vehicle into a sheriff’s patrol vehicle at the intersection of Buckley Road and Seventh North Street in the town of Salina.

This morning at approximately 1:57 a.m., a sheriff’s deputy on patrol in the town of Salina was travelling through the intersection of Buckley Road and Seventh North Street when a Chevrolet Equinox passed a red light at that intersection and struck the patrol vehicle. The deputy operating the patrol vehicle, Adam Quigley, was not injured in the crash. The driver of the Equinox, 35-year-old Koketso Ratala of Liverpool, sustained a minor injury in the crash and was determined to be intoxicated.

The impact from the collision caused significant damage to both vehicles, which had to be towed from the scene. Ratala was charged with driving while intoxicated and passing a red light. She was processed and released and is expected to appear before a judge in the Town of Salina Court on February 26th, at 5:00 pm