Town of Clay, New York – The Onondaga County Sheriff’s Office reports that Sheriff’s Deputies have charged a man with DWI after he crashes his vehicle into two parked vehicles in a Town of Clay neighborhood.

This morning at approximately 12:50 a.m., sheriff’s deputies responded to a motor vehicle crash on Lehman Street near Caughdenoy Road, which involved a vehicle that struck two parked vehicles in a driveway of a residential neighborhood. Deputies investigating the crash say the driver of a 2006 Saturn sedan, identified as Nicholas Rogalski (21) of Marlin Drive, Clay, had been traveling east on Lehman Street at an unsafe speed when he lost control of the vehicle and drove off the road striking two parked vehicles and a mailbox. 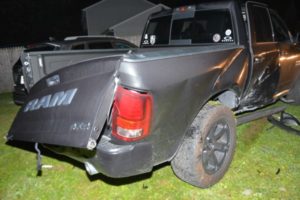 The impact from the collision caused significant damage to Rogalski’s vehicle as well as the two parked vehicles, a 2017 Dodge Ram pickup and a 2018 Nissan Rogue. Rogalski sustained minor injuries in the crash and was determined to be intoxicated. Deputies charged Rogalski with driving while intoxicated, operating a motor vehicle with a BAC of .08% or higher, aggravated DWI, unsafe speed and moving from lane unsafely.

Rogalski was processed and released and is expected to appear before a judge in the Town of Clay Court on November 7th at 5:00 pm.