As people from offices to corner stores; in Syracuse the video was being shared, you could hear snickering in the background. The following video is what set off the firestorm criticism regarding the incident and the employees involved;  Dunkin Donuts on North Salina Street Caught on Video Pouring Water on Homeless Man

Online, people began a campaign, calling the Dunkin Donuts phone simply saying, “Fix this!” The cause picked up momentum when Al-Amin Muhammad of We Rise Above the Streets, went live on Facebook as the community activist asked questions regarding the treatment of a homeless person. Muhammad has asked for the manager and is simply saying “if there is not a response, we will call for this Dunkin Donuts to be boycotted.” In later interviews, Muhammad has asked that the implicated employees not be fired, but corrective action should be taken.

After suspending the suspected employees seen and heard in the video, the Walak Group local Dunkin’ Donuts franchise decided to fire the staff involved in the incident.

Protestors arrived spontaneously, at the Northside Donkin Donuts continuing sporadically throughout the day. 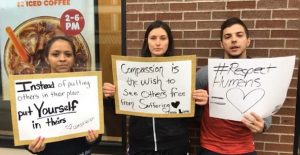 Destiny Odom, I protesting the ignorance of the employee who dumped water all over that homeless man who was just sleeping and trying to charge his phone, he could have been better trained better to handle the situation and I want him fired”

Jordyn Murray, “I’m here for the exact same reason she is, I just want the guy fired. It was absolutely rude and uncalled for, he wasn’t doing anything, bothering anybody, guy already has to walk home and he poured cold water on him. It’s cold outside, there’s no compassion for other people.”

Forrest Vohs, “There’s no compassion, no concern for his health or well-being, no concern for the community overall, obviously. That behavior has no place in it and he shouldn’t be working in it as well. That’s the basis of it. “Nothing wrong with Dunkin as a franchise location” Vohs adds he’s immediately backed up by Murray and Odom echoing the separation between the franchise and the employees.  Destiny continues, “The employee who was with him shouldn’t have encouraged the whole situation and should’ve stopped it.”

As the day progressed more became known about the “homeless man” named, Jeremy Dufresne victimized by the cruel attack. His family spoke out regarding his homelessness and condition. Horrified by what was done, an aunt said he was charging his phone so he could call his mother; and that relatives have offered him a place to stay.

Advocates for the homeless have connected with Jeremy Dufresne and his family. The hope is that this could be a new beginning, a sense of hope after being publicly humiliated.

Late afternoon on Monday October 1st a statement was issued by The Wolak Group, which owns the Dunkin’ on North Salina Street in Syracuse.

“Dunkin’ has been a part of the Syracuse community for many years, and as the franchisees who own and operate the North Salina Street location, we were extremely disturbed by the behavior of our employees captured in the video. It not only violated our written policies, but goes against our core values as an organization–which include creating a welcoming and hospitable environment and treating everyone with dignity and respect,”

“The employees involved in the incident have been terminated, and we will be contacting the individual in the video to apologize for the negative experience,” the statement continues. “We also intend to work with local advocates to make sure that our employees are better educated as to how to engage with homeless individuals and where to direct them in the community for appropriate assistance.”

A local business Glazed and Confused donated 1,000 donuts to Syracuse homeless shelters today. Paul Valenti and his wife Sarah were so touched by what occurred that they decided to make the donation. This isn’t the first time the company has been engaged in sharing, Glazed and Confused has a tradition of giving back to the community.

District Attorney William Fitzpatrick has stated that those who were involved could be charged with harassment. However, the District Attorney said he will defer to Dufresne before taking any action.

The Dunkin Donut controversy has sparked new awareness of the plight of homeless people in the Syracuse community, their challenges and efforts that are being made to reach the most vulnerable living in of our city.  This unfortunate incident has bought together Dunkin’, the city, the Syracuse police department, John Tumino of the homeless outreach In My Father’s Kitchen and Al-Amin Muhammad of We Rise Above the Streets.

Perhaps this is the beginning of a new awareness among the general public, what it means to be homeless. We now have awareness that there are agencies and people who work every day to ease the plight of the homeless our most vulnerable.  As a community there appears to be an overall consensus that this should not be happening, and by working together we can prevent incidents like this from happen in the future.