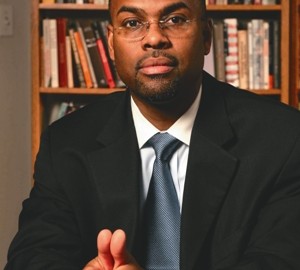 Eddie S. Glaude Jr., a professor and scholar of religion and African American studies at Princeton University and senior fellow at The Jamestown Project, has been chosen as the keynote speaker for Syracuse University’s 24th annual Martin Luther King Jr. Celebration, “Dare to Imagine a Better World,” in the Carrier Dome on Sunday, Jan. 18, 2009.

The annual celebration is among the largest University-sponsored events in the United States to commemorate King. Last year, more than 2,000 people attended SU’s event. The University’s MLK Celebration Committee is chaired this year by Sgt. Ryan Beauford of SU’s Department of Public Safety.

The evening program, which will include the presentation of the 2009 Unsung Hero Awards and entertainment, begins at 6:30 p.m. and is free and open to the public. Tickets for the dinner, which precedes the program at 5:30 p.m., are $25 for the general public and $13.75 for students without meal plans. Students with meal plans will be charged for one dinner. Tickets, which generally sell out soon after they go on sale, will be available Dec. 1. For ticket information, call Hendricks Chapel at (315) 443-5044.

Glaude will also appear earlier in the day at a community celebration and will lead an afternoon discussion based on his book, “In A Shade of Blue: Pragmatism and the Politics of Black America” (University of Chicago Press, 2007) in SU’s Maxwell Auditorium. Both the community event and the discussion are free and open to the public.

“Dr. Eddie Glaude is charismatic, energetic, stimulating and thought-provoking,” says Anthony Grant, a senior history major in SU’s College of Arts and Sciences and member of the University’s MLK Celebration Committee. “He speaks with a conviction that captivates people and causes them to listen to what he has to say.”

Glaude is the William S. Tod Professor of Religion and African American Studies at Princeton University. He is also a senior fellow at The Jamestown Project, a diverse, action-oriented think tank of new leaders who reach across boundaries and generations to make democracy real.

Prior to his appointment at Princeton, Glaude taught African American studies and religion at Bowdoin College and Amherst College. He received his bachelor’s degree from Morehouse College and his master’s degree and Ph.D. from Princeton University. Michael Eric Dyson, writing in the Chicago Sun-Times, said “Glaude is one of the most gifted young scholars in black religion today. He is a charismatic thinker and insightful writer who is breaking new ground by imaginatively treating primary sources in his scholarly ventures. Glaude’s star will only get brighter.”

Glaude is the author of “Exodus! Religion, Race and the Nation in Early 19th Century Black America” (University of Chicago Press, 2000). The book received the Modern Language Association’s William Sanders Scarborough Book Prize for outstanding scholarly study of black cultural life and/or literature. Glaude is also editor of “Is It Nation Time?

Contemporary Essays on Black Power and Black Nationalism (University of Chicago Press, 2002). This edited collection has been described as a “standard reference for students and scholars of African American intellectual history.”

He has also co-edited, with Cornel West, “African American Religious Thought: An Anthology” (Westminister John Knox Press, 2004), a text widely viewed as one of the most important books published in African American religion in the last five years.