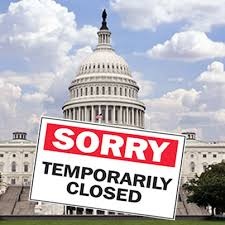 The government shutdown is now officially to be the longest in history, and editorial boards across the country are blaming Donald Trump. With 800,000 Americans furloughed or working without pay, Democrats are united in insisting that the president stop his temper tantrum and reopen the government. Links provided by the Democratic Party point out editorials from across the nation, representing a sampling of those offering broad condemnation of the government closure.

Austin American-Statesman: “Trump is responsible for turning it into a political crisis, and the president said nothing Tuesday night to justify the partial government shutdown that resulted from his demands over border wall funding. Congress and the president need to end this shutdown and start constructive discussions on the best ways to address the challenges at the U.S.-Mexico border.”

Chicago Sun-Times: “Take it from Illinois, this federal government shutdown is nothing but bad. And the man at the top will get most of the blame, as he should. For those of us who just lived through four years of such stupidity in Illinois, there’s a sense of deja vu in a partial government shutdown forced by a self-adoring man of business habituated to getting his way.”

New Jersey Star-Ledger: “But what started out as a symbol has become a dangerous fixation, one responsible for mothballing massive sectors of our government and keeping 800,000 federal employees at home without paychecks – despite Congress steadfastly refusing to fund his wall, despite consistent public opposition, and despite overwhelming evidence that the impact on drug trafficking would be negligible.”

Santa Fe New Mexican: “Democrats are right to rebut the ugly message that Trump spews when he discusses the southern border, as he did Tuesday night in a prime-time address from the Oval Office (complete with fundraising appeals before and after).”

Baltimore Sun: “The callous disregard to federal workers by the president is in contradiction to the traditional role the federal government has historically played as a safe zone for American workers. The salaries may not have been as lucrative as a private sector job, but the trade-offs, such as good benefits and job stability, were worth it for many families.”

Tampa Bay Times: “As the president previously said himself, he owns this government shutdown. He backed away from a deal to keep the government fully operating after pushback from conservative commentators, and his insistence on spending $5.7 billion to start building an extended border wall in largely isolated areas appeals only to his political base.”

CT Post: “Congress, including most Republicans, voted just weeks ago to keep the government open without funding for a border wall. The president was about to sign it into law when he changed his mind, likely prodded by conservative media personalities. This is no way to run a government.”

MassLive: “Anyone who has been paying even a bit of attention to the ongoing partial government shutdown that Trump created knows well that it’s all about the president’s demand for a wall on our nation’s border with Mexico. He wants to fulfill his prime campaign pledge, and he is refusing to budge until Congress gives him $5.7 billion for construction of part of his wall. The one he used to say that Mexico would pay for.”