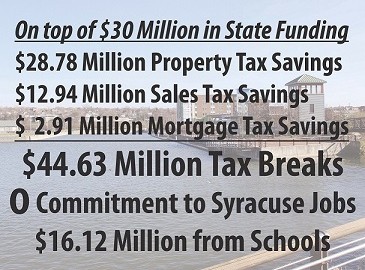 COR Development is currently working on redeveloping the city’s Inner Harbor. The company has requested incentives to build their hotel project, seeking a 15-year tax deal for its $324 million Syracuse Inner Harbor development.   On December 1st members of the public attended a scheduled meeting of the Onondaga County Industrial Development Agency commonly referred to as, OCIDA. Members of the agency cancelled the meeting at the last minute, leaving dozens of people in a packed room waiting to weigh in on the proposed tax deal.

Syracuse residents voiced their concerns and out right objections to the tax deal, which too many is giving away too much. Speakers complained about these “incentives” making a point stating emphatically, “we are a poverty stricken city”. 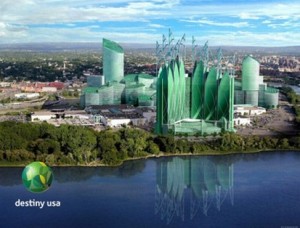 One of many “artists renderings” of Destiny USA

Tax deals which include PILOT agreements, sales tax exemptions and more, have been points of contention since the revelation that the Destiny USA project which was given a 30 year tax deal never built what was promised publically. The green spires jutting up from the structure capturing the sun’s power for energy. A Tuscany Village, a dome covered year-round park. Images of happy school children exiting buses due to our increased tax revenue the project promised to generate.

As a community, all but a few bought the line about what would be built at the expanded site. In the end we got a big box with more stores. No dome, no 20 story hotel, nothing has been built that resembles the snake oil presentation we were all treated to. An elaborate special display area setup on the 5th floor of the mall prior to its rebranding was a “fabrication”, and that’s being polite.

We now have a bigger box with corporate signs dangling from it like a bedazzled dress on a cheap hooker, at a convention vying for the attention of some drunken attendee. 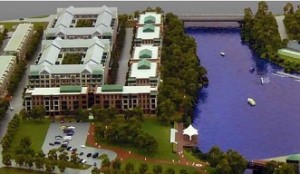 Syracuse residents have been promised so much from these “development projects” that we’ve grown skeptical of what’s being forced down our gullets.  The appearance of a cross-section of concerned residents should be a sign that people are fed-up with corporate welfare programs that produce a culture of dependency.