Syracuse – On the steps of City Hall, in front of a blue coffin, public officials, safety groups and crash victims rallied yesterday to demand state lawmakers act to make streets across the state safer.

The rally was one stop on a 1,000-mile road trip led by victims advocacy group Families for Safe Streets from New York City to Syracuse, Albany and Rochester and back to Long Island highlighting the devastating consequences of inaction on traffic safety. Each mile traveled represents the life of a New York State resident killed in traffic.

Rally goers called for the immediate passage of the Crash Victims Rights and Safety Act, a groundbreaking package of eight bills strengthening safety protections for residents around New York State. The deadline to advance these bills is June 10, the end of the legislative session.

“In 2020, preliminary estimates from the National Safety Council (NSC) show New York lost 963 lives in motor vehicle crashes, a 10% increase from the number of lives lost in 2019. We must take action now to reverse this dangerous trend,” said Jane Terry, Vice President of Government Affairs for the National Safety Council, an organizational supporter of the rally effort, which has an office in Syracuse. “The Crash Victim Rights & Safety Act includes legislation that would do just this. NSC urges the New York legislature to take action and pass these bills.”

During the road trip, rally goers will place flowers at Taft Road in North Syracuse where 27-year-old Larry Maturo was killed by a hit-and-run driver in June. They will also stop at Moraine Road in Madison, NY, in honor of Becky Eisenhut, killed while biking in Late May. 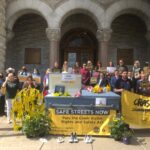 Safe Streets Now Protest at the steps of City Hall. 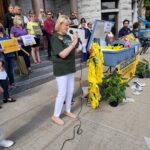 Speakers make their case for the legislation. 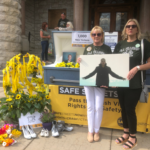 People speaking out for street safety. 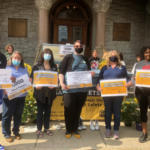 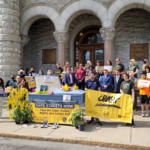 On the steps of Syracuse City Hall. 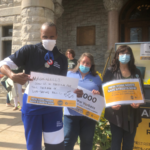 Protests in support of new legislation.

“Traffic deaths and injuries are a preventable public health crisis in Syracuse and across New York State,” said Syracuse Mayoral Candidate Michael Greene, who was in attendance at the rally. “I’m proud to support legislative efforts to make our streets safer because it is well past time to address this important issue.”

Other bills in the package include:

• Crash Victim Bill of Rights — to guarantee rights and a voice for crash victims and their loved ones in legal proceedings
• Speed Cameras 24/7 — to allow cameras in NYC to protect people at all times
• Dangerous Driving Act — to hold the most reckless drivers accountable and prevent future crashes
• Vehicle Safety Rating and Labeling — to inform consumers throughout NYS of a vehicle’s danger level to pedestrians and cyclists
• BAC .05 — to lower the blood alcohol content limit for DWI from from .08 to .05
• Right to Safe Passage — to require drivers pass bicyclists at a safe distance of min. 3 feet
• DMV Pre-Licensing — to educate NY drivers about safely interacting with vulnerable road users

The road trip will continue this week. Victims advocates will travel to Rochester, Albany and Long Island next before completing their 1,000-mile journey in Manhattan Friday.