Syracuse, NY – The good news from Syracuse Stage is that there are still excellent seats available for the holiday family show “Elf The Musical,” scheduled to run Nov. 23 – Jan. 6. While many performances are full or near capacity, the Syracuse Stage Box Office recommends patrons check dates after Dec. 28 as performances with good availability.

Tickets may be obtained at www.SyracuseStage.org, by phone at 315-443-3275 and in person at the Box Office.

Based on the popular 2003 movie “Elf,” starring Will Ferrell, the musical recounts the story of Buddy, a human child raised at the North Pole by Santa’s elves, who journeys to New York City to reunite with his family, including his father Walter Hobbs, a successful and cynical executive.

Adapted for the stage by Thomas Meehan and Bob Martin (book), Matthew Sklar (music) and Chad Beguelin (lyrics), the musical opened on Broadway in November 2010. It returned to Broadway the following year and launched a national tour in 2012.

“I’m so happy to be back at Syracuse Stage,” Drake said. “I feel like I left a little piece of my heart here last year.”

Drake added that her job this year is easy because “Elf The Musical” is written with “such heart, such warmth and such hilarity.” Drake especially urged people to bring children to the show, “They are going to have a blast.” Like the movie, however, the show would be rated PG for mild language and sarcasm.

This production also represents a kind of homecoming for choreographer Marcum, who was the associate choreographer on the original Broadway production. Marcum started with the musical when it was still in workshop development in 2009. It was his job to help shape the look and feel of the dance numbers.

While Marcum’s experience will be valuable to the Syracuse Stage production, he does not to intend to simply recreate the Broadway dances.

“This will be a fully Donna Drake version of the musical,” he said. “The idea is to pay homage to the Broadway choreography not to replicate it. That’s more fun.”

“Elf The Musical” marks the eighteenth holiday collaboration between Syracuse Stage and the Syracuse University Department of Drama. The annual show has become a tradition with many Central New York families and represents the value the 46-year partnership between Syracuse Stage and Syracuse University Department of Drama has for the students, the theater and the community. 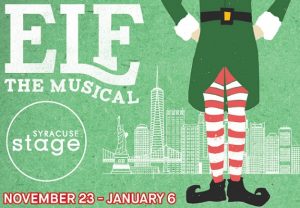 If this were a movie: The film version of “Elf” was PG.
Language: Minimal use of “damn,” occasional use of “bitchy.”
Adult Behavior: Implied drinking.
Sexual Content: Vaguely alluded to.
Violence: Some mild fighting on stage.
For which audiences: All ages.

Join the cast for a post-show celebration with live music presented by CNY Jazz, featuring Moe Harrington, food and drinks.

Join Syracuse Stage for a fun and festive Wednesday @ 1 lecture with Dr. Miles Taylor, English professor at Le Moyne College. Taylor teaches courses on comedy, the Catholic imagination, C.S. Lewis and language and linguistics.  The lecture will begin at 1 p.m. in the Archbold Theatre.

The Syracuse Stage bar will remain open after the show. Patrons will have the opportunity to mingle with the cast and crew of “Elf The Musical.”

Join the Young Adult Council for “Elf The Musical.” Tickets are available to high school students for $18 with no added fees. At 7 p.m., join other students for cookie decorating followed by “Elf The Musical” at 8 p.m. After the show there will be a Kahoot quiz with prizes. Those participating in Students at Stage must present valid School ID upon entry.

Relaxed/Sensory-Friendly performances provide a welcoming environment that lets all patrons express themselves freely without judgment or inhibition. These live theatre experiences invite and encourage individuals with autism, ADD, ADHD, dementia, and sensory sensitivities to enjoy the performance in a “shush-free” zone. All tickets for the relaxed/sensory-friendly performance are $25 and include a 100 percent refund right up to the start of the show. Tickets can only be purchased by phone, 315-443-3275, or in person at the Box Office for this performance.

The Syracuse Stage bar will remain open after the show. Patrons will have the opportunity to mingle with the cast and crew of “Elf The Musical.”