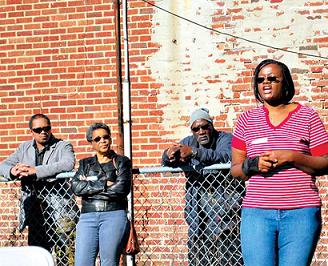 At a Saturday Nov. 13 gathering at the Mary Nelson Youth Center, many of the roughly 150 people in attendance took the opportunity to vent frustrations.

“Hopefully this will be a step in moving toward a solution,” said Syracuse Chief of Police Frank Fowler. “I’m excited to see people from within their own community gathering together to address the same problem.”

Fowler said in the coming weeks he would be speaking with community groups and talking with leaders and neighbors about the next steps. Yet a little more then 24 hours
later, a group of teens fired guns into the dozen anti-violence demonstrators that had gathered in Kirk Park Sunday afternoon.

Community members had many suggestions for what, and who, was to blame for the most recent rash of teen and youth violence. Speakers targeted parents who don’t question how their teenagers suddenly acquire hundreds of dollars in cash — or worse, create an environment where their kids feel responsible to provide for the family, by any means necessary.

But the Syracuse City School District’s out-of-school suspension system received special attention, with several speakers questioning the logic of the method. As a disciplinary action, a student awaiting a superintendent’s hearing is suspended from school until the hearing determines appropriate course of action for the student’s infraction.

But sending a troubled student off school property and into the street only opens the door for a student to action violent threats, or eliminates any daytime protection the student might have had from the threat of violence, some parents and neighbors argued.

The kids are angry

One of the most frightening things about the most recent spikes in violence is the age of the offenders and victims — they are only children. While some speakers Saturday questioned rhetorically why so many young people have so much anger, others pointed out the reasons: broken homes, an education system that is failing them, a community that offers little hope of employment after school.

Be the stranger they talk to While SCSD Superintendent Daniel Lowengard sat quietly in the front row of the crowd, Corcoran High School Vice Principal Alton Hicks had a suggestion for the community to participate first-hand in helping kids one-on-one.

On Nov. 22 and 23, the high school held report card conferences for the ninth through 12th grade, an opportunity for community members to sit down with a student and talk one-on-one about their grades and what factors in their lives might be affecting their schoolwork.

“Our kids are scared,” Hicks said. “And they’re looking for guidance.” Last year, Corcoran piloted the program for ninth graders, and about 50 community members came in to talk with students, Hicks said. The school holds the conferences each marking period, but this time, they were available for all students. “They don’t always want to talk
to us, as teachers and administrators,” Hicks said. “But they’ll talk to a stranger about what’s going on in their lives.”