This morning at approximately 7:09 A.M., deputies responded to the parking lot of the Mattydale Fire Department located at 172 East Molloy Road in the Town of Salina for an assault in progress. 911 dispatchers received an emergency distress call from an EMT’s portable radio and immediately dispatched deputies. Upon arrival, deputies located the injured EMT and the suspect, who was still on scene. Deputies interviewed witnesses who advised that the suspect was observed sitting in a damaged Mazda 6 vehicle when the EMT approached the suspect to check on his wellbeing. The suspect, who appeared under the influence began to physically assault and choke the EMT. 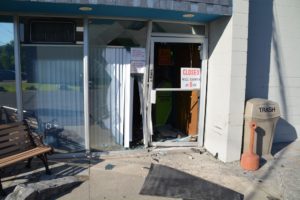 A subsequent investigation revealed that the suspect had just committed a burglary to Zonen Ltd., a Tobacco shop located at 6697 Old Collamer Road in East Syracuse. The suspect utilized his vehicle to breach the doors to the business to steal numerous nitrous oxide cartridges, also known as “whippits” which he later inhaled.