When Dana Balter announced her candidacy for the Democratic Party’s nomination to challenge incumbent Republican John Katko, she went through the traditional process. Dana reached out to Democratic Party members in the 4 counties that comprise the 24thCongressional District.

In 7 minutes Balter can explain to you what she stands for, what her goals are as a Congressperson. She also pivots to stating emphatically, “I’m going to represent the constituents of the 24th Congressional District.”  It takes time and effort to piece together a 4 county coalition, with a Progressive candidate as their leader. There’s an old cliché that says, “Organizing Progressives is akin to herding cats”. However, Dana Balter managed to achieve that seemingly impossible task, uniting the local Democratic Party heading into Election Day. 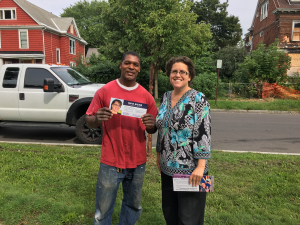 Balter has been clear about what she would do about Health Care, including protection for those with pre-existing conditions. She’s against the Trump Tax Cuts which have pushed America’s debt to the highest in history.  Balter is also against, the Conceal and Carry Reciprocity Act co-sponsored by John Katko which would allow those traveling from other states, to conceal and carry their weapons nationwide, regardless of state law.

Katko has also sided with Donald Trump on issues regarding “False Equivalencies” assigning equal blame on both sides regarding racial tension surrounding speech and actions. There are some cases where wrong is wrong, and Katko has not been strong enough in calling out President Trump for many of his statements disparaging minorities, immigrants and women. 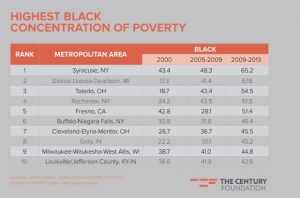 The 24th Congressional District is home to an area that tops national lists in concentrated poverty. The Republican led Congress has embarked on a mission to increase rents in HUD managed properties, and have failed to come up with an urban policy to address compelling issues.

Mr. Katko takes pride in using RICO to go after drug gangs in Syracuse, or congratulating someone he’s once prosecuted who’s now doing better in life. He’s also been in the African-American community defending feeding programs for the poor. It’s commendable, but that’s not enough.

The Congressman also believes that the Presidents tax cuts have created jobs in the region; unfortunately the good paying jobs never make it to the areas in Syracuse, suffering the most. 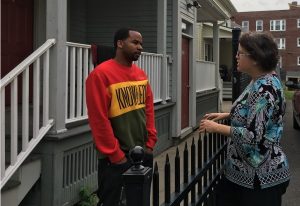 Dana Balter speaks with Andrew, a South side resident

Republican leadership has already indicated that due to the massive deficit (caused by tax cuts), dramatic changes are going to be made to programs like Social Security and Medicare. If you can recall, after Labor Day suddenly, Republicans found Health Insurance Jesus and started campaigning on protecting pre-existing conditions, something they previously rejected.

Under a Republican Congress, homes that are of high value had their homeowners interest deductibility slashed, a move that hurt states like New York which have high valued real estate. Our wealthier suburban neighbors received a tax increase with that change in Tax Law.

Katko’s Campaign demonized grass-roots members of CNY Solidarity Coalition, a group of citizens organizing to make substantive change in the communities in which they live. And the Republican PAC sponsored negative television commercials that stretched the truth to a new level of elasticity.

For all the aforementioned reasons urbancny.com is endorsing Dana Balter for Congress in the election that takes place on Tuesday November 6th

Vote as if your future depended on it, because it does.