Syracuse, N.Y. – September 18, 2018 – The Everson Museum of Art launched a year-long celebration of art, architecture and community to mark the 50th anniversary of its landmark building designed by internationally-acclaimed architect I.M. Pei.

The Everson’s 60,000 square foot facility opened in 1968 and is I.M. Pei’s first museum design. The museum houses more than 10,000 artworks, hosts over 80, 000 visitors each year and stands as an architectural landmark and cultural hub within the city of Syracuse.

The museum’s year-long celebration kick-off began with a sold-out 50th Anniversary Gala  held on the Community Plaza and in the Everson Galleries. The performative and interactive event was directly inspired by the museum’s architecture. The gala featured a chef-created four-course dinner in the museum’s galleries, craft cocktails under the stars and two live performances by Bay Area-based BANDALOOP, a vertical performance and aerial dance company.

“For 50 years, our one-of-a-kind arts venue has made our extensive collection of modern and contemporary art accessible through our numerous educational public programs, artist lectures, special exhibitions, and docent-led tours,” said Elizabeth Dunbar, Director and CEO of the Everson Museum of Art. “We are excited to celebrate our facility’s milestone anniversary with our Syracuse and Central New York communities by bringing them a year full of special encounters with art and architecture.”

Throughout its 50th anniversary year, the Everson will launch a wide array of new initiatives, exciting programs and engaging exhibitions that reflect its mission to provide individuals with meaningful encounters with modern and contemporary American art. Highlights throughout the year include the exhibitions Art Within Art: The Everson at 50,  Time Capsule, and The Very Mirror of Life: Ceramics at the Everson 1968-2018; two new lecture series, Women in Architecture and Histories of the Everson; a series of First Friday events featuring Design Talks by the American Institute of Architects; and a number of architecture-themed classes and activities. 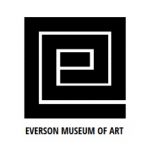 Anniversary festivities will also extend outside the museum and throughout Syracuse with public events being held around the city, including the City Sketch Crawl, architecture tours and a display at the Marriott Syracuse Downtown. The museum has also published a children’s activity book, The Architecture Explorer, that will be distributed to school groups and be for sale in the Everson Museum Shop.

“The Everson’s impact has reached far beyond the walls of its landmark building. It has helped make Downtown Syracuse a vibrant urban core and lends itself as hub for numerous offerings beyond just art,” said Cliff Malzman, Chair of the Everson Board. “This year of special programs and events will celebrate all that the museum has accomplished in the past and showcase its vision for transformative future.”