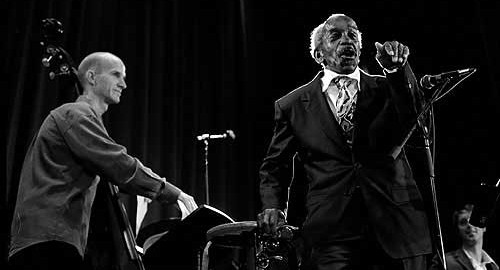 Syracuse, NY: On Friday, September 12th 2008, at 6pm Redhouse welcomes a screening of the film “Everything’s Coming My Way: The Life and Music of Gordon Thomas” followed by a Q&A with the film’s directors.

A live performance by Thomas will follow the Q&A. There will be a champagne reception with the filmmakers and Thomas at the end of the evening. Tickets are $25 general admission. Shows start at 6pm, Doors at 5:30pm. Tickets are available at http://www.theredhouse.org

About: The 2005 Stacey DeWolfe and Malcom Fraser film “Everything’s Coming My Way: The Life and Music of Gordon Thomas” depicts Thomas’ life story as an emerging New York jazz musician over a period of over sixty years. Thomas, currently 92, broke into the music scene as a standby trombonist for Dizzy Gillespie and Ella Fitzgerald. As Thomas recorded original songs throughout the 1960s, the musician supplemented his time with jobs as a maintenance man and textile worker. In the span of his career, Thomas has written 200 songs and recorded one hundred. Songs include “Singin’ In the Shower” and “Peace, Peace, Peace; Peace In The Middle East”. The film’s portrayal of Thomas’ personal sacrifices, obstacles, achievements, and the artist’s creative process is complemented with commentary by fellow musicians Gonzales, Mocky, Taylor Savvy, Irwin Chusid, and Citizen Kafka.