People are afraid, and rightfully so as daily lives have dramatically changed at the drop of a hat. One day everything was normal. Then the world changed. The impact of COVID-19 on our lives has yet to sink in. For many of us we’ve been on some modified form of lockdown since warnings came out of Albany through the Office of the Governor.  First came the cascade of local events cancelled or postponed due to warnings about gathering large groups of people. Then came the NBA cancellation and the demise of March Madness. And what madness it unleashed, suddenly everyone in the area had an insatiable desire for of all things…toilet paper. I ventured out to see what was going on in retail. This was just after the “pause” was announced.

It didn’t end there, at Walmart a couple glowed when they snatched up the last large bag of Taco Shredded cheese, “they didn’t have any at Wegmans we got lucky getting the last one!” Entire sections of the foods area were stripped bare as human tornados tore through eggs, milk, and flour. An elderly couple ambled around the corner with a cart full of Hard Apple Ale. 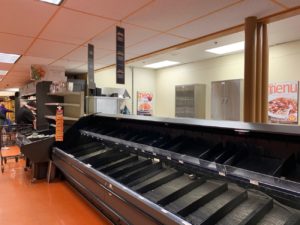 Meanwhile at Wegmans, social distance rules were in effect at Fairmount, where the cashier not only wiped down the belt carrying your food; the pad where credit cards are entered received a cleaning, after each customer.  The sad tale of empty shelves, the soup area display empty of both Progresso and Campbells, all gone. Not a piece of organic chicken to be found as that appeared to be another area picked clean by eager shoppers.

It wasn’t panic, it was different. Like a nor’easter without the snow, but knowing you’ll be stuck at home indefinitely. There were no Doppler radar images to tell us where the nemesis was. No forecast saying everything will be fine once the danger passes.

In times such as these, times of uncertainty, times of anxiety, people have taken to irrational behavior such as buying all the toilet paper, cleaning wipes, and hand sanitizer.

New York State and local officials sounded the alarm with the order to “Pause”, which meant everything was about to close. What was once the fodder of science fiction, pandemic scenarios were appearing on our televisions, and in our news. It wasn’t fake. The threat was real.

At times like these, regardless of your political beliefs we turn to our national leaders, especially our President for guidance and reassurance. During this pandemic New York Governor Andrew Cuomo stepped in as our surrogate President.

The Trump Administration knew about this early with time enough to plan a response. But instead of warning and protecting the homeland they told us, “everything is fine, we only have a few cases the virus will go away in the warmth of spring”.

We learned that there was a Pandemic Task Force assembled by President Obama, we also learned it was dismantled by President Trump. We found out that our Intelligence Officials were warning our President and members of congress back in January about a virus. This virus COVID-19 had the potential to wreak havoc on our basic systems, health, education, employment and the economy. And yet, like an iceberg in the northern Atlantic, our President ignored the danger lurking under the dark late winter waters.

People are fearful when they don’t know, when they’re locked in, and there’s a lack of truthfulness coming from the most important office in our land. In this global pandemic, being poor and/or living paycheck to paycheck, it’s like being below with the common folk on the Titanic, riding in “Steerage” Class.

First, they came for the toilet paper, don’t look now, the wealthy are taking the lifeboats.