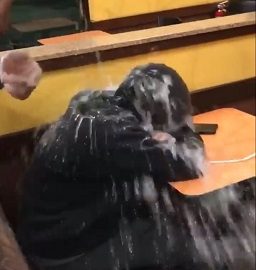 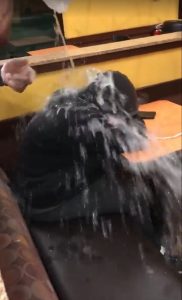 Homeless man having water poured on him at N. Salina St. Dunkin Donuts

A local Facebook member shared a live video that apparently shows a Dunkin Donuts employee berating and then dousing the homeless man with a pitcher of water. You could hear snickering in the background.  Dunkin Donuts on North Salina Street Caught on Video Pouring Water on Homeless Man

Online, people have begun calling the Dunkin Donuts phone simply saying, “Fix this!” The cause has picked up momentum when Al-amin Muhammad of We Rise Above the Streets, went live on Facebook as the community activist asked questions regarding the treatment of a homeless person. Muhammad has asked for the manager and is simply saying “if there is not a response, we will call for this Dunkin Donuts to be boycotted.”

This video will be viewed across the country. Dunkin Donuts, regional or corporate needs to “Fix this” immediately.

Protests have begun this morning at the North Salina Street, Dunkin Donuts.