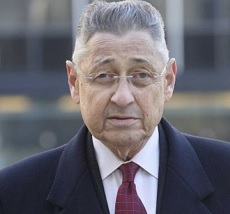 “Today’s decision sent a simple message that officials who abuse the public’s trust will be held accountable. Justice was served.” Read the statement from Governor Andrew M. Cuomo regarding sentencing of Sheldon Silver

Silver was sentenced to 12 years in prison on May 3rd on charges that included honest services fraud, money laundering and extortion. Evidence presented during trial included the accusation that Sheldon Silver used his NY State Senate seat to assist a cancer researcher; he received almost $4 million in fees for his “services”.

He was a feared politician as speaker of the New York Assembly. Many in the Syracuse area will recall what happened to former NY State Assemblyman Michael Bragman, when he attempted to challenge the speaker for the top spot in the Assembly. He was soon without a seat, cast out by a leader who has a reputation for being ruthless towards opposition.

Albany has long had the reputation as being one of the most crooked state legislatures in the nation. Soon after the indictment of Democratic leader Sheldon Silver, Dean G. Skelos, who was Mr. Silver’s Republican counterpart in the State Senate, was convicted of corruption. The aforementioned represent only two of many New York lawmakers who’ve been convicted and sentenced for using their public positions to enrich themselves.

New York Lawmakers and Their Sentences

A list of the longest prison terms given to convicted former state officeholders in New York in recent years.