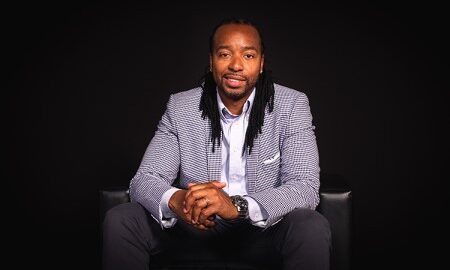 The Keenan Center is building an entrepreneurial pipeline from Le Moyne College directly into the Central New York business community.

Hasan Stephens, founder and executive director of the Good Life Youth Foundation and a professor of Africana Studies and hip-hop at SUNY Cortland, has been named Entrepreneur-in-Residence for the Keenan Center for Entrepreneurship, Innovation and Creativity in the Madden School of Business at Le Moyne. His appointment is for the 2021 calendar year.

“Entrepreneurship is an important lens through which Le Moyne’s students should have an opportunity to view the world. I have witnessed how critical life skills such as innovative thinking combined with innate talents creates tomorrow’s desperately needed agents of change. I am looking forward to achieving this with the Keenan Center of Entrepreneurship, Innovation, and Creativity’s amazing team.”

“We are so excited and honored to welcome Hasan to serve as entrepreneur-in-residence,” said Madden Dean Jim Joseph ’83. ““Hasan’s passion for his transformational work is surpassed only by his compassion for the community he serves. He is the epitome of Greatness Meets Goodness.”

The Good Life Youth Foundation model was designed based on Stephens’ own life experiences as an impoverished youth growing up in inner-city Bronx. Stephens started the Good Life Foundation to serve as a culture change agent to help prevent youth recidivism, violence, poverty and incarceration. Earlier this year, the Foundation received an Alliance for Economic Inclusion Award, in partnership with Le Moyne College and Key Bank.

Throughout his career as a youth advocate, mentor, entrepreneur and educator, Stephens has used his talents in the hip-hop culture to help shift youth culture and its perspectives. He is an active member of the Onondaga County Juvenile Detention Alternative Initiative Steering Committee and the Central New York State Regional Youth Justice Team. In addition, Stephens is a leadership consultant for the Central New York Community Foundation’s Leadership Classroom. He currently serves on the boards of The Redlich Horwitz Foundation, a foundation focused on foster care reform, and the Upstate Minority Economic Alliance, a minority chamber of commerce for upstate New York. Stephens also serves as a member of the Madden School of Business Advisory Board.

Before establishing the Good Life Youth Foundation, Stephens began engaging youth in New York state through his career as “DJ Maestro,” a radio personality with Clear Channel Communications and an Emmy Award-nominated TV commentator with News Channel 9’s “Coming Together for a Safer Syracuse.” Stephens also has worked on MTV and has made national appearances as a guest host on Black Entertainment Television’s “Rap City.”

About the Keenan Center-Thanks to the continuous generosity of Tim and Kathleen Keenan, ‘81 and additional gifts by alumni and corporations of $2 million, the Keenan Center is building an entrepreneurial pipeline from Le Moyne College directly into the Central New York business community. The Center has already helped to support a number of students, alumni and community entrepreneurs, has participated in events like Upstate Unleashed, and hosts Le Moyne’s annual Dolphin Tank this spring, a showcase competition where student teams compete for over $30,000 in pre-seed dollars from regional business leaders.