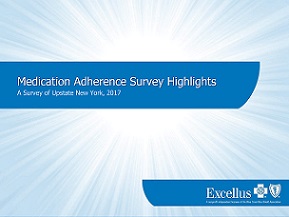 SYRACUSE, N.Y. — Nine out of 10 upstate New York adults believe that taking medications as prescribed is “very important” or “extremely important,” yet four out of 10 missed one or more doses of medications they were prescribed, according to a new survey commissioned by Excellus BlueCross BlueShield.

“It seems obvious that people should take their medications as directed,” said Nicholas Massa, M.D., medical director of Excellus BlueCross BlueShield’s Central New York region. “It’s particularly important for those individuals who are living with chronic conditions such as high blood pressure, high cholesterol or diabetes, because it may be the best way to manage their disease.”

The online survey, administered by the polling firm One Research, contacted 2,000 upstate New York adults, which is a representative sample of the region’s U.S. Census Bureau demographic profile. More than half of the participants (1,215) were currently taking a prescription medication for a chronic condition and were asked about medication adherence.

About half of the total U.S. population and 90 percent of adults ages 60 and older used at least one prescription drug during the previous month, according to the Centers for Disease Control and Prevention.

The Excellus BlueCross BlueShield survey revealed that when patients stop taking or change the way they take their prescription medication, it’s usually because they forget or don’t have the medication with them (43 percent), they don’t like the side effects (20 percent), or there’s an issue with the cost (14 percent).

Eight percent of survey respondents said they stop taking or change the way they take their medication when they feel they can get by without it.

Massa cautions that many diseases have silent symptoms that are not readily apparent until they have caused damage to the body.

Among upstate New York adults who missed a dose of a prescription medication, about three out of 10 reported that their symptoms returned.

“If you don’t take your meds and your symptoms persist, your doctor may think the drug didn’t work for you and prescribe something stronger, and perhaps even more expensive,” said Massa.

The World Health Organization believes that getting more patients to take their medications as directed may have a greater impact on the health of the population than any improvement in specific medical treatments.

Massa’s advice for improving adherence to prescription medications is to establish a daily routine and set reminders. Pharmacists can help patients create a dosing schedule. Electronic devices, including pillboxes and medication dispensers with alarms that sound when it’s time to take the medication, can assist with reminders. Medication reminder apps also are available for smartphones.

Prescription drug home delivery also can help improve medication adherence. Research published in the Journal of Managed Care and Specialty Pharmacy shows that Medicare Part D beneficiaries who use home delivery for medications to manage chronic conditions such as diabetes, hypertension or high blood pressure are more likely to take their medications as directed than those who pick up their prescriptions from a retail pharmacy.