Update July 6, 2016:  After an investigation It has been determined that the man shot on June 26th had a gun. If he was unarmed, the New York State Attorney General would take the case and assign a special prosecutor. Based on that information, this case will  now be handled by Onondaga County District Attorney, William Fitzpatrick.

Weeks have passed since the Father’s Day riot and every day since, tensions in the Near Westside neighborhood have run high. There are reports from civilians that an unarmed man was shot in the back by a Syracuse Police Officer on that Sunday. The initial shooting and the 12 or more shots fired, cascaded into an absolute breakdown of law and order. Surprisingly, initially only one police officer arrived to attend to the situation which involved as many as 300 people celebrating.

At this point the story changes depending on who you are listening to. It is apparent from social media that there was a party going on and until someone decided to fire a weapon, everything was going fine, no problems. Then the situation turned chaotic, when suddenly the Father’s Day party was shattered by the sound of gunfire.

Video from You Tube records people who were in the immediate vicinity shout, “They shot an unarmed man in the back, she shot him in the back”. Then, the James Geddes Housing complex and surrounding neighbors, began to resemble many other cities that we’ve seen on the news.

Reviews of several videos show a party that suddenly turns chaotic when shots rang out. People are fleeing the area like some disaster movie and the monster is in plain sight. The monster was there, the shooters that fired shots that evening, sent people on a journey that may have repercussions for years to come. Imagine children who witnessed this ruckus. The fear’s now instilled, so when they hear a firecracker or see a police officer there’s unease and panic.  In the days following the clash, neighbors describe a neighborhood “under occupation.” 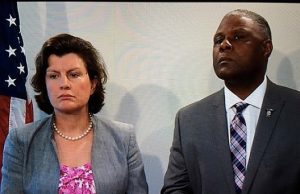 Additional video has been released giving people a truncated view of individual incidents from that fateful evening and following days.  Sorted by law enforcement and local media outlets, videos appeared showing the police officer running. (Stop)  Next video show people running for their lives in the opposite direction of the officer. (Stop) Shots were being fired by two men captured on surveillance cameras, what followed became a stampede of people, running for their lives. (Stop)

The day after, police presence was high on the heels of the worst outbreak of violence in recent memory.  Employees of area businesses stayed inside, the sound of speeding police cars was unnerving in a neighborhood that has received so much attention for, “turning things around.”

Heavily armed police stormed into an area home, the raid left everything in the house, topsy-turvy, broken windows, emptied cabinets, even tiny decorative window panes were popped out individually. Neighbors witnessing this style of policing recoiled as they saw the raid unfold.

Most of what’s being reported is hindsight after watching videos produced by social media or surveillance cameras. The union representing the police officer is supporting the officer who, “ran towards the gunfire while everyone was running away.”  The union official described the atmosphere that greeted the officer as chaotic, and that the person found shot had a gun. A scene has been painted where the crowd was in the process of ganging up on and injuring the officer. Remember, many facts have not been released supporting this version of what happened that evening. The officer has been placed on administrative leave.

Video of this unprecedented unrest is being used selectively to support one position or the other. With bits and pieces of video being patched together it is clear that, in statements made by Syracuse Mayor Stephanie A. Miner, summing up the ordeal, that neighbors were celebrating Father’s Day, and everything was calm until “somebody decided to bring guns”.

Now, the police are looking for tips to determine what happened as they continue their investigation. This case may also be handled by the New York State Attorney General’s Office if it is determined that the officer fired the fatal shot that took the life of Gary Porter, 41 of Syracuse.  New rules instituted by New York Governor Andrew Cuomo require a Special Prosecutor be appointed in any case of a police officer, killing a civilian. According to published reports, Onondaga County District Attorney, William Fitzpatrick is not getting cooperation from the public.

There will be an investigation that will reveal what really happened that fateful Father’s Day, Sunday June 19th, 2016.  Those who appeared in videos using guns will be arrested and charged.

The more information is released from multiple sources including the PBA, as more video is viewed by the public, more questions surface. If the Syracuse Police Department had to dispatch to a situation with hundreds of people having a party, why send one officer? The Syracuse Housing Authority has a security force, were they engaged in keeping the peace on SHA property? What’s happening with these initiatives on the Near Westside that have been quite successful, and are they reaching residents in these properties? 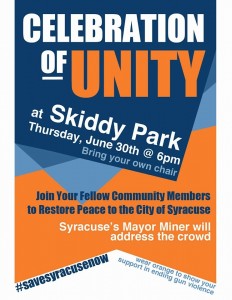 A Celebration of Unity event is planned for Skiddy Park on Otisco Street, Thursday June 30th at 6 p.m.  It is a chance for the community to come together, it being called an “ecumenical liturgy.”

The event sponsored by many neighborhood groups including; St. Lucy’s Catholic Church, National Action Network and the Near Westside Initiative.  People are asked to bring a chair and wear the color orange in support of Gun Awareness Month.

People who are part of the Near Westside Initiative and other projects designed to build the neighborhood up, are noticeably upset, the hard work put in to the area has gone unnoticed during this Father’s Day shooting incident.  From new housing to additional job opportunities for neighborhood residents, the Near Westside is experiencing a re-birth. Many people and organizations have invested time, energy and volunteer hours to build this back into a neighborhood people can be proud of.

Social media has lit up with participants casting dispersions on the entire neighborhood, as if it were a sanctioned gun battle. It was a peaceful gathering until the shots rang out, “pop, pop, pop, pop, pop ,pop, pop, pop, pop, pop ,pop”.  Those who live in the area, those running for their lives are in most danger of falling victim to gun violence. The Syracuse Police Department’s job is to preserve the peace and regardless of how they handled the situation, throwing bottles and expletives at law enforcement solved nothing. These actions that are now, “caught on camera” do nothing but confirm the worst stereotypes targeting residents living in the City of Syracuse.