Fowler Drama Club is presenting their spring musical, Once on this Island!   There is an island where rivers run deep.  Where the sea sparkling in the sun earns it the name “Jewel of the Antilles.”  An island where the poorest of peasants labor, and the wealthiest of grands hommes play.   Ti Moune, a peasant girl, rescues a wealthy boy from the other side of the island, Daniel, with whom she falls in love.

Unbeknownst to Ti Moune, the pompous gods who preside over the island make a bet with one another over which is stronger, love or death, the stakes being Ti Moune’s life. When she pursues Daniel, who has returned to his people, Ti Moune is shunned because of her lowly status. Her determination and capacity to love, though, is not enough to win Daniel’s heart and Ti Moune pays the ultimate price; but the gods turn Ti Moune into a tree that grows so strong and so tall, it breaks the wall that separates the societies and ultimately unites them. Single tickets for each production are $5 in advance and $8 at the door.  Children under 5 are admitted free. 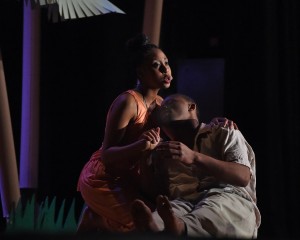 A peasant girl Ti Moune, played by Tatyanna Jordan rescues a wealthy boy from the other side of the island, played by Carlos McArthur during he musical “Once on This Island” performed at Fowler High School. Photo by John Berry

Tickets can be purchased in person at Fowler High School, or for a small additional fee by using their eventbrite.com page.