Based on the incredible life story of the Godfather of Soul, the film gives a fearless look inside the music, moves and moods of Brown, taking audiences on the journey from his impoverished childhood to his evolution into one of the most influential figures of the 20th century. Boseman is joined in the drama by Viola Davis, Octavia Spencer, Nelsan Ellis, Lennie James, Tika Sumpter, Jill Scott and Dan Aykroyd.

You know him by many names: “Mr. Dynamite,” “The Godfather of Soul,” “The Hardest Working Man in Show Business.” But now get to know the man behind the legend. Born dirt-poor in South Carolina in the middle of the Great Depression in 1933, James Brown survived a young life of abandonment, abuse, reform school, jail. Nobody ever taught him the rules. So he was destined from the start to break them.

As an amateur boxer or a street-corner busker, he channeled hard knocks into a beat that echoed his own pulsing life force. One of the most influential performers to ever hit the stage of popular music, the most sampled artist in history continues to inspire and inform our most popular and relevant artists today.

Based on Brown’s incredible life story, the film gives a fearless look inside the music, moves and moods of the icon, taking audiences on the journey from his impoverished childhood to his evolution into one of the most influential figures of the 20thcentury. 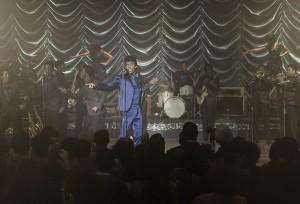 Academy Award®-winning producer Brian Grazer, who has brought to the screen memorable and lasting stories of accomplishment over adversity, such as John Nash in A Beautiful Mind and Eminem’s semiautobiographical 8 Mile, has worked for more than a decade trying to bring this unique tale to audiences. With just the right team, this longtime dream has become a reality.

When not serving as The Rolling Stones frontman, Mick Jagger has spent much of the past two decades producing films, television and documentaries. Jagger, who was approached by the James Brown Estate to deliver the artist’s story to the screen, came aboard to produce the drama. Together, he and Grazer lead the team that has painstakingly taken the tale of Brown’s fascinating life and is triumphantly delivering it to audiences across the globe.

Now, with director/producer Taylor at the helm, the dynamic story of Brown’s life, laced with electrifying performance set pieces, unfolds. In his starring role, Boseman embodies Brown’s charisma, drive and musical genius. With countless hours of hard work, he’s also mastered the man’s incredible moves. Get on Up’s music sequences include highlights from the dazzling Apollo Theater concert of 1962, the game-changing throw-down on the T.A.M.I. Show filmed in 1964, the historic Boston Garden gig of 1968 and the full- on funk of the Olympia theatre concert in Paris in 1971.

There’s much to ponder between the beats. Instead of the expected cradle-to-grave narrative, the biopic unfolds in a nonlinear style that allows James Brown to speak directly to us and tell his story of finding astonishing mastery over adversity.

There Was a Time: Roots of Get on Up

As befits “The Godfather of Soul,” James Brown’s first musical home was one full of gospel. But before long, the gospel group he joined as a teen was transformed by jazz and blues in the juke joints of the “Chitlin’ Circuit,” and The Famous Flames were born. The group’s first hit single, “Please, Please,Please,” was released in 1956 but credited to “James Brown with His Famous Flames.” It turns out that no one had consulted the Flames about their revised billing status, and they all quit.

James Brown kept moving forward, mesmerizing live audiences with his signature music, moves and sexual energy. An expressive, emotional soul crooner of the highest order, he could work a ballad—such as “Try Me” and “Lost Someone”—or shift into foot-stompers like “Out of Sight” and “Night Train.” His voice swooped and soared, screeched and growled, and he’d pivot from tender to dangerous in a heartbeat. He continued to work with a quartet of revolving Famous Flames as his backup singers (Bobby Byrd returned in 1959), while cultivating a large backing band with lots of horns, christened the James Brown Orchestra.

He was a peacemaker at the Boston Garden after Dr. Martin Luther King, Jr.’s assassination in April 1968 and gave soul power a rallying cry with the single “Say It Loud—I’m Black and I’m Proud” later that year. In February 1969, Look magazine put his picture on its cover with the headline: “Is He the Most Important Black Man in America?”

He was a dealmaker, too, and knew how to take care of business. It didn’t matter if something hadn’t been done before…or hadn’t been done before by a black man. As he refined his sound, churning and turning it inside out, funk came into being, and another new era of music swept the world. By 1970, The Famous Flames were gone for good, but Byrd stayed, bassist William “Bootsy” Collins and his brother, guitarist Phelps “Catfish” Collins, came on board, and Brown had a new band, The J.B.’s.

When funk eventually yielded its throne to hip-hop, Brown stayed relevant in a new way. His signature beats were foundational to hip-hop artists, who have sampled them frequently for years. The drum riff near the end of his single “Funky Drummer” is one of the most sampled beats of all time.

Like many of his generation, producer Brian Grazer grew up listening to James Brown. “I loved his sound and the beat and everything about him as a kid,” Grazer explains, “but never in my life did I think I’d end up producing the James Brown movie.” It was the hip-hop community that inspired him. “In the late ’90s, while researching the movie that became 8 Mile , I came across many pivotal figures in the hip-hop world,” recounts Grazer. “Chuck D, Dr. Dre, Slick Rick, LL Cool J, all of Wu-Tang Clan—ODB, Ghostface Killah—they all said they were influenced by James Brown. What they said stayed with me, and I decided I had to find a way to do a movie about this figure who inspired so many.” Courting Brown for the film rights was a lengthy process. When an agreement was finally reached, Grazer commissioned several writers to work on a script. With a final draft in hand from English playwrights Jez Butterworth and John-Henry Butterworth, with a story by the Butterworth brothers and Steven Baigelman, he was ready to hire a director.

On December 23, 2006, James Brown fell ill unexpectedly and died two days later, at the age of 73. His death was marked with a funeral procession that traveled through Harlem and ended at the Apollo Theater, where he’d made history recording his self-financed “Live at the Apollo” album in 1962.

The film rights that Grazer had worked so long to acquire reverted to the James Brown Estate, and the biopic was at a standstill. In time, the estate needed someone to oversee those rights, and chose Peter Afterman to serve as its arbiter. Afterman, who has also handled music licensing and visualmedia for The Rolling Stones since 2009, believed that Stones frontman Mick Jagger was just the man to reignite the fire that was the James Brown story