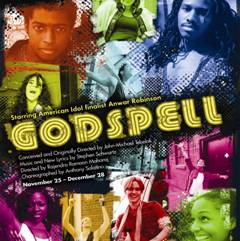 (Syracuse, NY)-This groundbreaking, energetic musical based on the Gospel of St. Matthew is a celebration of worldwide community, filled with popular hit songs and irresistible goodwill. Continuing a holiday tradition at Stage, Godspell is presented by both Syracuse Stage and the Department of Drama in The College of Visual and Performing Arts at Syracuse University. American Idol Finalist Anwar Robinson joins the ensemble cast of 10, which features Broadway veterans and six of the Department of Drama’s finest students. Godspell will run November 25-December 28. Tickets are available in person at 820 East Genesee Street, by phone at 315-443-3275 or by visiting the web at http://www.SyracuseStage.org.

Godspell is one of the biggest off-Broadway and Broadway successes of all time-the recipient of a 1972 Grammy Award for Best Score from an Original Cast Show Album, and a 1977 Tony nomination for Best Original Score. Popular tunes like the international hit “Day by Day,” “Prepare Ye The Way Of The Lord,” “All Good Gifts,” “Turn Back, O Man” and “By My Side” share parables about the life of Jesus, with messages of kindness, tolerance and love.

Director Rajendra Ramoon Maharaj, making his debut at Stage, started his work on Godspell by asking the question, “Where would we find Jesus today?” Maharaj concluded that Jesus would be in the places where people most need help. Stage’s version of Godspell will begin at the United Nations and then travel to Cuba, Haiti, South Africa, Sudan, China, India, Iraq and New Orleans.

“Godspell is about a human being on a spiritual quest to places around the world that he never thought he would travel, meeting people of rich cultures and traditions that would galvanize him to live a life of peace, love, and happiness,” said Maharaj. “This universal theme is one that we can all relate to no matter what our individual faith or religious traditions. Godspell reminds us all that we are more alike than different, that we are all connected to one another, that we all need one another, and that all of our lives and stories have great value.”

Highlighting the production will be world-dance choreography by Anthony Salatino, a graduate of The Julliard School and Associate Professor in the Department of Drama at Syracuse University. Music by Charles Creath will inform the migration from one country to the next, and Scenic Design by Adam Koch will provide a towering vista where characters come together in a singular future of hope.

The ensemble cast reflects the youth, energy and global perspective of the show, comprised of four Equity actors and six students from the Department of Drama.

In the role of Jesus is Anwar Robinson – Top Ten Finalist in the fourth season of American Idol, Recording Artist, Broadway and Film Actor. Often compared to his musical idol Stevie Wonder, Robinson has recorded and performed with Clive Davis, Patti LaBelle, Kelly Price and Donnie McClurkin. In 2005, he was the seventh place finalist on the fourth season of American Idol. In 2007, Robinson took on the role of “Collins” in the 2007-2008 National/International Tour of Jonathan Larson’s iconic rock opera, RENT. Robinson’s first feature film Friends & Lovers: Ski Trip 2 will be released later this year, and he is currently working on his debut solo album The Truth About Love.

Charles Creath (Musical Director/Composer) got his start in theatre with a first-run production of Don’t Bother Me…I Can’t Cope. Later, in California, he worked with Motown as a Staff Writer/Producer and had a long affiliation with the West Angeles Church of God in Christ as organist and later as Youth Director. Upon his return to St. Louis he began touring nationally and in South America with numerous theatrical productions as Musical Director. For some time he was a fixture as a pianist on the old Goldenrod Showboat moored at the foot of the Arch (St. Louis). He has toured throughout Europe as the Musical Supervisor of the Golden Gospel Singers and as a Workshop Clinician with the Gospel Connection. Now, in St. Louis, Charles is the Resident Musical Director of the St. Louis Black Repertory Company and Minister of Music for the St. Peter African Methodist Episcopal Church.

Anthony Salatino (Choreographer & Fight Choreographer) recently choreographed the New York City Opera premiere of Margaret Garner, music by Richard Danielpour, libretto by Toni Morrison (based on her novel Beloved) and directed by Tazewell Thompson. A graduate of The Juilliard School, he has choreographed for many opera and dance companies throughout the United States. Last season at Syracuse Stage he directed Fiddler on the Roof. Previously at Syracuse Stage, he choreographed Christmas Carol; directed and choreographed The Sound of Music, West Side Story, Peter Pan; and choreographed The Wizard of Oz, Big River and My Fair Lady. An associate professor in Syracuse University’s Department of Drama, Tony conceived, directed and choreographed three original productions: Bravo Piaf!, The Table (Der Tisch) and The Clowns. He has performed with dance companies throughout the United States and Europe, and performed with the (New York) City Center Company at the White House.

Josh Bradford (Lighting Designer) lives, and primarily works, in New York City. His recent designs include The Fourposter and The Dining Room for Keen Company, The Oxford Roof Climber’s Rebellion for Urban Stages, The Children of Vonderly and for Ma-Yi, Everything’s Turning into Beautiful for The New Group, Birth and After Birth for The Atlantic, and History of the Word for The Vineyard. Regional credits include the Asolo, the Long Wharf, Merrimack Rep, Crossroads, the Raue Center, and the Emelin Theatre. Josh is also resident Lighting Designer and Production Manager for Keen Company in New York City and the Dorset Theatre Festival in Vermont. He began studying design at Middlebury College and holds an MFA from NYU’s Tisch School of the Arts.

Godspell runs November 25-December 28 at Syracuse Stage. Tickets are now on sale, ranging $24-$48, with discounts for seniors, students and groups. Rush tickets range $20-$30 on the day of performance. Student rush tickets are $9 on the day of performance, with student ID. Tickets can be purchased in person at the Syracuse Stage Box Office at 820 East Genesee Street, by telephone at 315-443-3275, or online at SyracuseStage.org. For Group Discounts (10 or more) call 315-443-9844.

Syracuse Stage is Central New York’s premier professional theatre. Founded as a not-for-profit theatre in 1974 by Arthur Storch, Stage has produced more than 220 plays in 35 seasons including numerous world and American premieres. Each season upwards of 90,000 patrons enjoy an exciting mix of comedies, dramas and musicals featuring the finest professional theatre artists. In addition, Stage maintains a vital educational outreach program that annually serves over 30,000 students from 24 counties. Syracuse Stage is a constituent of the Theatre Communications Group (TCG), the national organization for the American theatre, and a member of the League of Resident Theatres (LORT). In addition to ticket sales, Syracuse Stage performances are made possible by funds from Syracuse University, the Central New York Community Foundation, the New York State Council on the Arts, The Shubert Foundation, Onondaga County, and corporate, foundation and individual donors.