Anthem of Praise
God is Trying to Tell You Something (Color Purple)
How Majestic Is Your Name
Intermission
Special performance by Joan Hillsman’s Music Network
Intermission
Hallelujah, You’re Worthy
Lean on Me
Amazing Grace 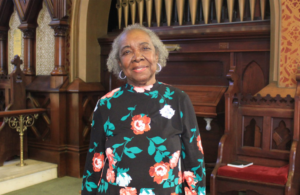 Dr. Hillsman relocated to the Syracuse area from Washington , DC in 2009. Since her arrival she has worked on various projects. She has had the pleasure of working on Syracuse’s Mayor Miner’s Arts Transitional Team and also Syracuse’s “Say Yes to Education” Program as well as organizing a Syracuse Chapter of the Gospel Music Workshop of America and produced a CD of original gospel music in collaboration with Bethany Baptist Church, Syracuse, NY. 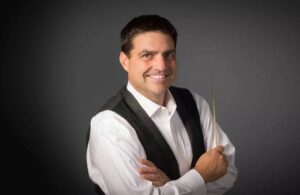 Sean O’Loughlin (b.1972) is the Principal Pops Conductor of Symphoria, the exciting new symphony in Syracuse, NY and the newly appointed Principal Pops Conductor of the Victoria Symphony in Victoria, B.C. Canada. He is a fresh voice and a rising name in the music world. His music is characterized by vibrant rhythms, passionate melodies, and colorful scoring. Commissions from the Boston Pops Orchestra, the Los Angeles Philharmonic and the Hollywood Bowl Orchestra highlight and showcase his diverse musical abilities. As a conductor, he has led performances with the Boston Pops Orchestra, the San Francisco Symphony, the Chicago Symphony, the Hollywood Bowl Orchestra, the Minnesota Orchestra, the Dallas Symphony, the Vancouver Symphony, the Atlanta Symphony, the Baltimore Symphony, the Houston Symphony, the Victoria Symphony and the Seattle Symphony amongst others. He was the assistant conductor and arranger for a production of Sgt. Pepper Live in Las Vegas featuring the band Cheap Trick. He has served as conductor for national and world-wide tours with Josh Groban, Sarah McLachlan and the Jerry Garcia Symphonic Celebration. He has also appeared on ABC’s Good Morning America with Josh Groban and NBC’s “A Very Pentatonix Christmas.”

Through his growing number of commissioned and published works, Sean is excited to continue contributing to the rich history of orchestral and wind band literature. His music is published by Excelcia Music, Hal Leonard and Carl Fischer. He is a frequent guest conductor with professional orchestras around the country and abroad. An annual ASCAP Special Awards winner, Sean was a composition fellow at the Henry Mancini Institute in Los Angeles, and holds composition degrees from New England Conservatory and Syracuse University.

Special thanks to Cora Thomas and Dr. Joan Hillsman for assistance with this event!