“The New Yorker has published an article on Attorney General Eric Schneiderman, which reports multiple women making serious allegations of assault.  No one is above the law, including New York’s top legal officer.  I will be asking an appropriate New York District Attorney to commence an immediate investigation, and proceed as the facts merit.  My personal opinion is that, given the damning pattern of facts and corroboration laid out in the article, I do not believe it is possible for Eric Schneiderman to continue to serve as Attorney General, and for the good of the office, he should resign.” 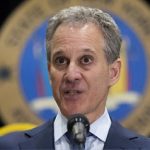 “It’s been my great honor and privilege to serve as Attorney General for the people of the State of New York. In the last several hours, serious allegations, which I strongly contest, have been made against me. While these allegations are unrelated to my professional conduct or the operations of the office, they will effectively prevent me from leading the office’s work at this critical time. I therefore resign my office, effective at the close of business on May 8, 2018.”