Governor Cuomo to Request Clearance from Defense Secretary Mattis to Fly MQ-9 Drone, Which Will Provide Situational Storm Awareness on the Ground

Earlier today, Governor Andrew M. Cuomo announced that the New York National Guard is preparing to send 10 soldiers and two UH-60 Blackhawk Medivac Helicopters with 30 days of medical supplies to Raleigh-Durham, North Carolina to assist with response and recovery efforts in the wake of Hurricane Florence. Fifty additional Airmen have also been deployed from the 106th Rescue Wing of the New York Air National Guard. Governor Cuomo will request that the Secretary of Defense allow the 174th Attack Wing to fly their MQ-9 remotely piloted aircraft from Syracuse to provide post-storm situational awareness for the on-scene commanders and emergency personnel on the ground.  One hundred additional National Guard Members are on standby.

A rush transcript the Governor’s remarks is below: 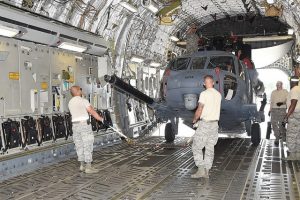 Top of the morning to you. Let me introduce, we have some new people with us today. And let me start at my right. We have Major Paul Hogan to my far right, from the New York State Police. Melissa DeRosa, Secretary to the Governor, she is not a new person. Alphonso David, Counsel to the Governor, he is not a new person, he’s actually an old person. Captain Wallace from the National Guard and we have Major Gendron from the National Guard.

As people know, Hurricane Florence has made landfall in North Carolina earlier this morning as a Category 1 storm. It is threatening, it is dangerous, it is nothing to be trifled with. The storm will proceed throughout the day and then the storm is supposed to proceed to the Carolinas and to Virginia.

New Yorkers have been through Hurricanes. We went through Superstorm Sandy. We’ve had floods. We’ve had every kind of curveball that Mother Nature can throw at us and we have been helped by our neighbor states in an extraordinary way. And New Yorkers are simple, and basic, generous, and open-hearted and as people have been there for us, we want to be there for them.

So, New York is going to do everything it can to come to the aid of the people of North Carolina and South Carolina, Virginia, whoever needs us. We’ve already deployed 50 Airmen from Gabreski Air Force Base with two CH-47 heavy lift helicopters, two Blackhawk helicopters. We’re sending down two specially equipped medevac helicopters to do rescues. We’re going to send another 50 National Guard down today and we have 100 National Guard on stand-by.

We are unfortunately, we’ve gone through so many natural disasters and so many emergencies, we’ve developed a proficiency in handling the emergencies. And we have equipment and we have trucks and we generators and we’re only several hours away from the Carolinas so we could be extraordinarily helpful if they needed it. We spoke, I spoke with people in the Governor’s office today and they are obviously in the middle of the storm. I know what that’s like, so they’re busy. But they’re going to be focused on the aftermath and the transition. Right, a situation like this you go through stages. Stage 1 is the emergency deployment, health and safety and life. Making sure people evacuate. They don’t evacuate, making sure they’re safe. Rescue, etc. You get to phase 2, which is the transition to the recovery, and that tends to be more resource intensive, and I said again anything you need, whenever you need it, New Yorkers here, ready, willing to able help. We’ll wait to see if they call for any other resources but whatever they call for, we will be there. That is the New York way.

Second, the President made a comment about Hurricane Maria in Puerto Rico. This President makes many statements that are just outrageous and obnoxious and untrue. There was a point in time when one would be shocked when the President of the United States said something that is untrue. No more. Now, if the president says something that is untrue, it means it’s either Monday, Tuesday, Wednesday, Thursday, Friday, Saturday or Sunday. That is the only relevance because it’s a daily occurrence for this President. For him to say that the federal effort in Puerto Rico was a success, is a separation from a reality that is actually frightening. What the federal government did after Hurricane Maria is basically abandon the people of Puerto Rico and I believe there was a discriminatory impact to that. I can’t prove it but I believe the people of Puerto Rico have a different skin color and they speak a different language, and this federal government treated them as second-class citizens. Because they are citizens of the United States of America. New York did what New York does. We stepped in. We stepped up and in many ways we filled the void that the federal government should have filled. But look at the juxtaposition between the President now and the President before Hurricane Maria in Puerto Rico. The President has made numerous statements about this coming storm and he has gone through great efforts to talk about how he has deployed FEMA and resources and the federal government stands ready. He’s had a number of press conferences. Why didn’t he do the same thing before Hurricane Maria in Puerto Rico? That is the question. Why such efforts on behalf of the Carolinas and these other states, which I fully respect and applaud and I think is appropriate and obviously New York stands ready to help. But just as it was appropriate for the Carolinas, it was appropriate for Puerto Rico. Except it was absent for Puerto Rico. And for this to come on the heels of his statement, that it was a success. 3,000 people lost their lives. And he calls it a success.

Mr. President, how many people have to die in an emergency for you to call it a failure? So it is disturbing, it is outrageous, and by the way the people of Puerto Rico are still recovering from the hurricane and the aftermath, and the recent revelation where they just found millions of bottles of water or whatever it was under a tarp. It was incomplete, it was incompetent, it lacked humanity, and the federal government should be ashamed of itself. But that’s where we are with this situation.