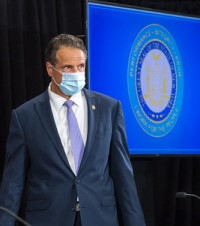 Hospitalizations Drop to 2,335—Lowest Since November 18; Down 599 Over Past Week

Intubations Drop to 371—Lowest Since November 30

Western New York’s 7-day average positivity rate dropped to 2.82 percent yesterday. The positivity rate in every region of New York State has now dropped below 3 percent for the first time since November 5, 2020.

“As we make progress defeating the COVID beast and the numbers continue to come down, we are incrementally reopening our economy based on the science and the data,” Governor Cuomo said. “This is all good news, but we aren’t through this pandemic yet and it’s essential that New Yorkers continue practicing safe behaviors like washing hands, wearing masks and socially distancing to slow the spread. We will get past COVID, but only if we do it together, so we need every single New Yorker to do their part and get vaccinated so we can begin to recover, reimagine and rebuild.”

Of the 2,048,489 total individuals who tested positive for the virus, the geographic breakdown is as follows:

Yesterday, 23 New Yorkers died due to COVID-19 in New York State—the lowest single-day death toll since November 10, 2020—bringing the total to 42,185. A geographic breakdown is as follows, by county of residence: