Governor Andrew M. Cuomo today announced substantial construction progress has been made on the sweeping $50 million transformation of the State Fairgrounds in Onondaga County. Following a tour of the Fairgrounds, the Governor unveiled a new date stone in the redesigned Main Entry Gate honoring the history of the nation’s first state fair – one of many components of the plan underway to build the Fairgrounds into a year-round, premier multi-use facility. The Governor additionally announced the launch of the State Fairgrounds Privatization Task Force to evaluate options to maximize the State’s historic investment and grow the region’s economy.

“The State Fair is a central part of New York’s history, and an annual showcase of all that our state has to offer. Whether it’s agricultural competitions, state-of-the-art technology exhibits, or live performances, the State Fair is where we show off the best of New York,” Governor Cuomo said. “Each year we strive to make the New York State Fair better than before, and with this investment we are reimagining the fair to ensure it remains a major economic engine for generations to come.”

The $50 million plan to redesign the State Fairgrounds, announced by Governor Cuomo last fall, includes a larger 15-acre Midway that will feature new rides, attractions and improves the visitor experience with cell phone charging stations and resting areas. The redesign plan also includes a 315-site RV park, 15 acres of flexible park space, and various parking and pedestrian safety improvements. Renderings unveiled today of key components of the plan, which will be displayed at construction zones throughout the Fairgrounds, can be viewed here.

Construction of the State Fairgrounds’ new RV park, expanded Midway and 15 acres of flexible park space is on track to completion in time for the Syracuse Nationals Car Show in July and the 2016 Great New York State Fair opening day on August 25.

The date stones embedded in the Fairgrounds’ new arched Main Entry Gate specially honor the history of New York’s role hosting the first-ever state fair. The stones are dated 1840 – the date on the original carriage entrance arch built in 1900 – and 2016.

The Governor additionally announced the launch of the State Fairgrounds Privatization Task Force to evaluate privatizing the site to leverage and expand on the State’s $50 million investment. The Task Force will be charged with evaluating the prospective benefit of partial or full privatization to the region’s economy, plus the ability to maximize the State’s sweeping redesign plan and further expand capacity of the site such as by building a world class, multi-purpose expo center.

In the coming months, the Task Force will conduct analyses and a series of public meetings to collect feedback from the community and the State Fairgrounds’ business partners. The Task Force will deliver a report to the Governor by December 31, 2016.

New Main Gate: Fairgoers will enter the 2016 Fair through a brand new, ADA-compliant gate, built to honor the arched carriage gateway used a century ago. The new design, along with the move to full use of electronic ticketing, will allow for faster ticketing and admissions. Once inside the gate, fairgoers will see a new entrance plaza that includes a large video board to assist with finding one’s way around the rebuilt grounds. 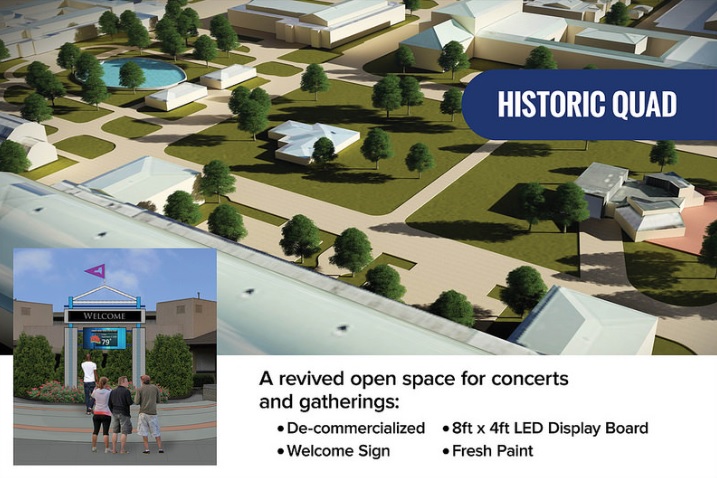 Revitalized Historic Quad: The historic area of the Fair, which encompasses the five oldest exhibit buildings and Chevy Court, will sport a cleaner, more open look, with more seating and new signage. Vendors in the area have been moved to the larger vending spaces in the newly-redesigned program area. 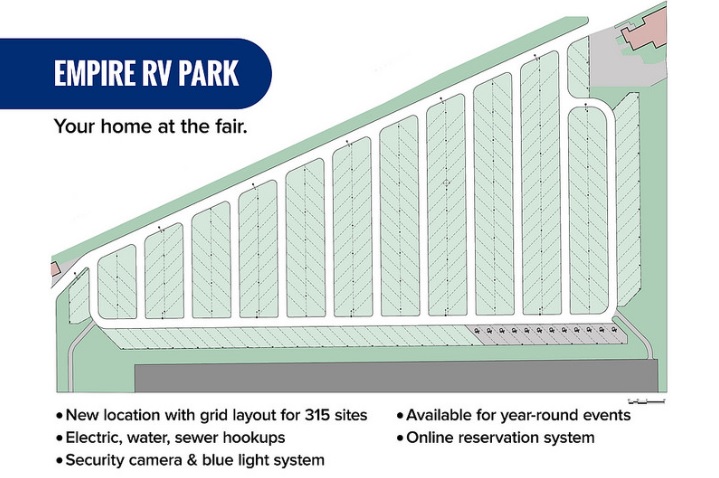 New Empire RV Park: A brand new RV park, called Empire RV Park, will provide 315 spaces with underground water, sewer, and electrical service, making the Fair more attractive to shows and events involving lengthy travel. Already, more than half of the new park’s spaces have been rented for this year’s Fair and every space has been rented for its first use, at the Syracuse Nationals classic car show in early July. 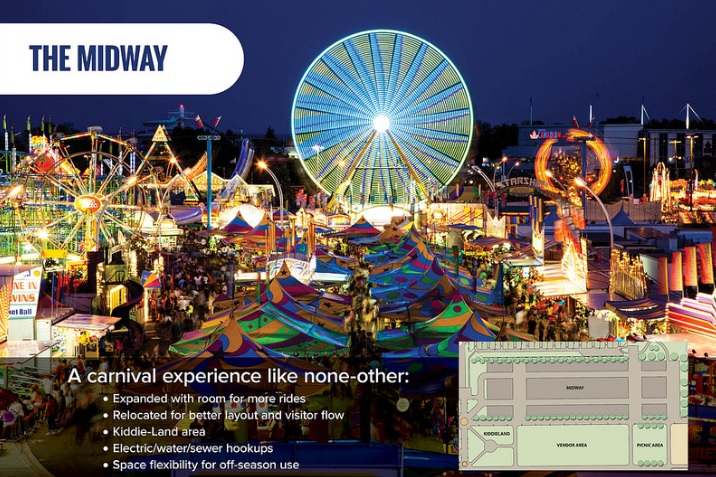 Expanded Wade Shows Midway: Special, heavy-duty pavement is currently being installed for an expanded and more comfortable Wade Shows Midway. Walkways in the midway will be more open, with more seating and shade available. More of the Midway’s electrical infrastructure will be underground, reducing cabling across walkways and improving pedestrian safety. Also, a new Kiddieland area of rides for smaller children will be adjacent to the main Midway and much closer to the main areas of the Fair. The open, paved space and built-in infrastructure will also help attract major non-Fair events. 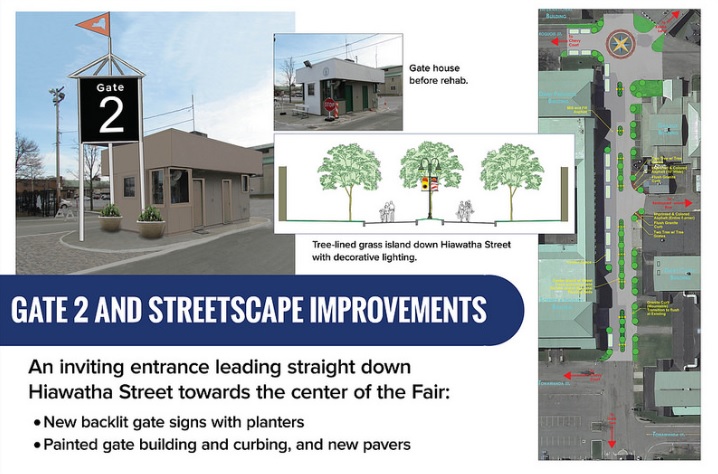 Enhanced Pedestrian Safety and Vehicle Access: Hiawatha St., which connects the Fairgrounds with the main year-round vehicle access gate, will have an attractive greenspace median built along the length of the road from the back of the Science and Industry Building to the back of the Dairy Products Building. The median will lead directly to a new central intersection called The Crossroads, replacing the former tower, which will have a large compass design overlaid on asphalt. The compass notes Syracuse’s central location within the state, with points of the compass pointing to other New York communities. The Crossroads is intended to be a central and more open meeting place for Fairgoers. 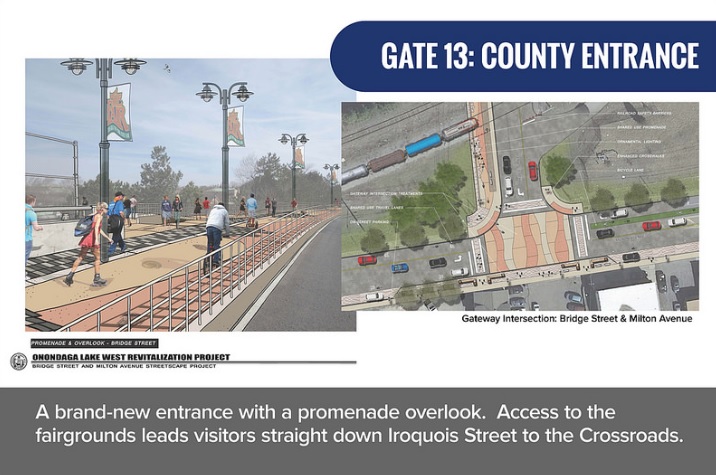 New Gate 13 Entrance Near Onondaga Lake: A new entrance gate is being created, along Bridge Street, that ties in with the larger Onondaga Lake West Revitalization Project. Pedestrian access along Bridge Street is being widened and beautified. The new gate will allow people to enter at the space between the Center of Progress Building and Art & Home Center, onto Iroquois Street on the Fairgrounds. Iroquois Street leads Fairgoers straight to the central meeting point at the new Crossroads compass.

Additional construction is underway to improve drainage, programing and vending, and more logical navigation throughout the Fairgrounds. See additional photos in the gallery below. Click on images to enlarge. 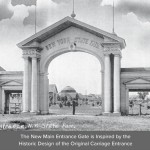 Historic Gate from the NYS Fair’s past 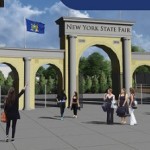 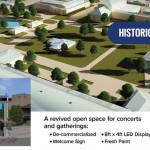 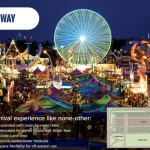 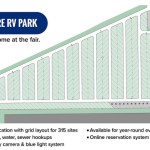 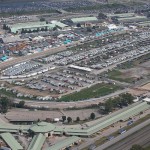 Aerial view of the NYS Fair 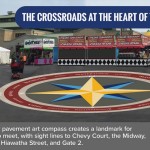 “Crossroads” at the heart of the Fair 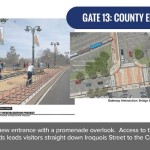 Today’s announcement complements “Central NY Rising,” the region’s comprehensive blueprint to generate robust economic growth and community development. The State has already invested nearly $3 billion in the region since 2012 to lay the groundwork for the plan – capitalizing on global market opportunities, strengthening entrepreneurship and creating an inclusive economy. Today, unemployment is down to the lowest levels since before the Great Recession; personal and corporate income taxes are down; and businesses are choosing places like Syracuse, Oswego and Auburn as a destination to grow and invest in.

Now, the region is accelerating Central NY Rising with a $500 million State investment through the Upstate Revitalization Initiative, announced by Governor Cuomo in December 2015. The State’s $500 million investment will incentivize private business to invest well over $2.5 billion – and the region’s plan, as submitted, projects up to 5,900 new jobs. More information is available here.​