Governor Issued Letter to 500 Jurisdictions with Police Departments in State

Governor Andrew M. Cuomo today announced new guidance for the New York State Police Reform and Reinvention Collaborative, which was established by the Governor’s Executive Order in June. The guidance offers a framework and topics for consideration by local police departments, elected officials and citizens as they develop their local plans for reform. Per the Governor’s Executive Order, every locality must adopt a plan for reform by April 1, 2021 to be eligible for future state funding.

The Governor also issued a letter to 500 jurisdictions with police departments in New York State. 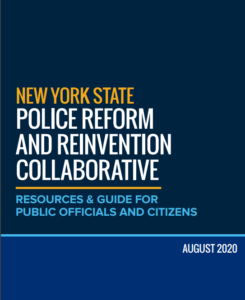 “We have to address the tensions and lack of trust between our communities and the law enforcement that serves them. I am sending a letter to 500 jurisdictions, explaining that it is imperative that we address this urgent crisis,” Governor Cuomo said. “I understand it’s complicated. I understand it’s difficult. But people are dying. New Yorkers do not run from a crisis – this is a time for leadership and action. Local elected officials must work together with the community and their police forces, to develop and implement reforms for a safer, fairer policing standard.”

Today’s guidance builds on the Governor’s actions following the death of George Floyd. Earlier this year, Governor Cuomo signed into law a series of reform policy items – called the “Say Their Name” agenda – including allowing for transparency of prior disciplinary records of law enforcement officers by reforming 50-a of the civil rights law; banning chokeholds by law enforcement officers; prohibiting false race-based 911 reports and making them a crime; and designating the Attorney General as an independent prosecutor for matters relating to the deaths of unarmed civilians caused by law enforcement.

The full text of the Governor’s letter is below:

Many communities all across the country are dealing with issues concerning their police departments.  The millions of people who gathered in protest, even in the midst of a public health crisis, made that clear.  The situation is unsustainable for all.

Maintaining public safety is imperative; it is one of the essential roles of government.  In order to achieve that goal, there must be mutual trust and respect between police and the communities they serve.  The success and safety of our society depends on restoring and strengthening mutual trust.  With crime growing in many cities, we must seize this moment of crisis and turn it into an opportunity for transformation.

While the conflict is real and the issues are complicated, we know in New York that denial or avoidance is not a successful strategy.  To that end, on June 12, 2020, I signed an Executive Order requiring each local government in the State to adopt a policing reform plan by April 1, 2021.  The Order authorizes the Director of the Division of the Budget to condition State aid to localities on the adoption of such a plan.

To ensure these plans are developed through an inclusive process, I called for the New York State Police Reform and Reinvention Collaborative.  With more than 500 law enforcement agencies in our large and diverse state, there is no “one size fits all” solution.  To rebuild the police-community relationship, each local government must convene stakeholders for a fact-based and honest dialogue about the public safety needs of their community.  Each community must envision for itself the appropriate role of the police.  Policies must be developed to allow the police to do their jobs to protect the public and these policies must meet with the local communities’ acceptance.

“Collaborative” is the key word.  It would be a mistake to frame these discussions as an adversarial process or an effort to impose top-down solutions.  Issues must be aired but solutions must be crafted.  The collaborative process should:

I urge everyone to begin these discussions immediately.  Restoring the relationship between the community and the police is in everyone’s best interest, and conversation may be required to enable each stakeholder to understand others’ points of view.  Time is short.

Local elected officials are the natural position to convene the process.  If the local electeds are unable or unwilling to manage the collaborative, the state can select an appropriate convener for that jurisdiction.

Change is hard.  But change is necessary if we are to grow.  The tension must be resolved.  Order and public safety must be ensured.  I am excited by the possibilities and I am hopeful that this time of crisis will evolve into a moment of creativity and progress.  It is normal to make adjustments to fit changing values and circumstances.

We are addressing the COVID crisis by acknowledging the problem, having productive dialogue and by working together.  Let’s do the same here.

This is an opportunity to reinvent law enforcement for the 21st century.