Community Grid Presented as Preferred Alternative for the Project, Which Would Be Largest Project Built by the State Department of Transportation in Its History

New I-81 Project Website Available at i81.dot.ny.gov; Provides Forum for New Yorkers to Comment on the Draft Document

Governor Andrew M. Cuomo today announced the release of the Draft Environmental Impact Statement for the Interstate 81 Viaduct Project, a major milestone that keeps this transformative project on track to break ground in 2022. The project will remove the existing elevated structure dividing the City of Syracuse and replace it with an integrated Community Grid that will disburse traffic along local north-south streets, create a new business loop, and reconnect the neighborhoods severed by the interstate. Governor Cuomo recently announced that the FY 2022 Enacted State Budget includes $800 million toward the first phase of construction on the project.

“The Interstate 81 project represents a historic opportunity to correct one of the most damaging planning blunders of the 20th Century and this is a major step toward making this a reality,” Governor Cuomo said. “I urge all interested parties to review this document and offer their thoughts as we continue to engage the community and work toward a final outcome that reconnects neighborhoods, enhances safety and mobility in and around Syracuse and improves quality of life for the entire region.” 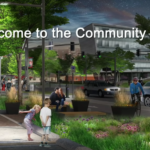 Welcome to the Community Grid 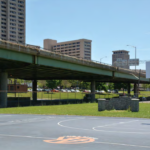 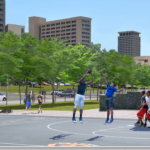 Following the release of the preliminary DEIS in April of 2019, the NYSDOT held an open house, 11 neighborhood meetings and numerous one-on-one sessions with business owners, stakeholders, residents and elected officials. In total NYSDOT received more than 1,000 comments that were ultimately included in the version of the document that was submitted to the Federal Highway Administration for its now-completed review.

NYSDOT and FHWA will accept comments on the document through 5 p.m. Eastern Daylight Time on September 14, 2021. All substantive comments received will be summarized and responded to in the Final Design Report/Final EIS for the Project. The public may submit comments using the Department’s electronic comment form or by emailing i81opportunities@dot.ny.gov; by sending it via U.S. Mail to the addresses below; by leaving a voicemail on the Project hotline, 1-855-I81-TALK (1-855-481-8255); or by providing it verbally at the Project’s public hearings. Find out more about the public hearings on the new I-81 website here.

The I-81 Viaduct Project Public Hearings for the Draft Environmental Impact Statement and Eminent Domain Procedure Law will take place on Tuesday, August 17 and Wednesday, August 18. 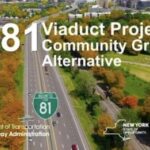 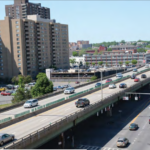 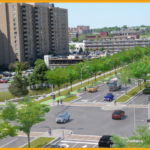 On Tuesday, August 17 at 11 a.m. and then 5 p.m., the project team will be holding two virtual public hearings. To submit oral comments, please register here. Registrants will be given a link to the Zoom hearing where you can make a public comment. A live-stream of the hearing will be available for those who do not wish to make an oral comment.

On Wednesday, August 18, the project team will be conducting two in-person public hearings. Doors open at 3:30 p.m. at the OnCenter located on 800 South State Street. A pre-recorded presentation, will be shown at 4:00 p.m. and 6:00 p.m., which will be followed by oral comments. Guests have the option of presenting comments to an audience or dictate them privately to a stenographer. A live-stream of the hearing (without submitting an oral comment) will be available on the NYSDOT YouTube Page. A sign language interpreter will be present.

State Department of Transportation Commissioner Marie Therese Dominguez said, “The Interstate 81 viaduct project is a once-in-a-generation opportunity to not only restore our aging infrastructure but build it back better; and, in the process, reconnect long-divided neighborhoods, restore vitality and create equity and opportunity. From the very beginning of this process the Department of Transportation has worked to engage the community and the Draft Environmental Impact Statement is product of those efforts. I urge everyone to review it and offer their thoughts and feedback.” 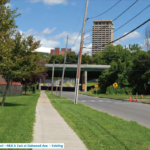 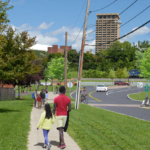 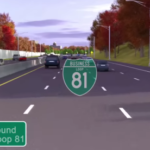 The $1.9 billion project aims to reverse the ill-considered decision made in the 1950s to build the viaduct through the heart of the City and, through the construction of the Community Grid, provide new opportunities for inclusion and equity. The Community Grid, which the State Department of Transportation has determined is the preferred alternative, will relieve existing traffic congestion issues in the city and improve access to and from the interstate highway network and key destinations, including the downtown business districts, area hospitals and Syracuse University.  It will also provide safe and ADA accessible pedestrian and bicycle amenities throughout the project area.

Plans call for the removal of the aging and now-obsolete I-81 Viaduct between the New York, Susquehanna and Western Railway and the I-81 & Interstate 690 interchange, reconnecting neighborhoods that have been separated since the viaduct’s construction in the 1960s. The project would also upgrade a portion of Interstate 481, which would be re-designated as I-81; and construct the new “Business Loop 81” along Almond Street to improve connections to downtown and other business districts. 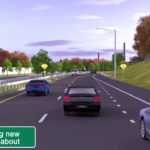 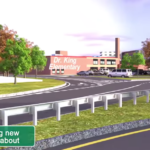 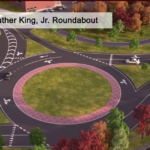 Department of Transportation officials will be highlighting a number of project features in the community in the weeks leading up to the public hearings on August 17 and 18.  Department officials engaged in extensive public outreach to reach today’s milestone, communicating with thousands of residents, members of the community, stakeholder groups and elected officials, as well as collecting and reviewing thousands of written comments.

Additional project features that NYSDOT will highlight in detail in the coming weeks will include:

After federal concurrence is achieved, the project will break ground in 2022.

Preliminary plans call for Phase 1 to include work on the northern and southern sections of Business Loop 81, work on I-690 over Crouse and Irving Avenues, and the conversion of I-481 to I-81 including a number of road and bridge projects along the corridor.

Local leaders spoke in support of this massive project scheduled to start in 2022.

Senator John W. Mannion – “The completion of the DEIS marks a major milestone as work at the state, federal, and local levels of government to replace I-81 continue to move forward. We all have a vested interest in modernizing the transportation infrastructure in Syracuse and Central New York. I encourage all residents to participate in the upcoming public comment period so every voice and perspective is heard.”

Senator Rachel May – “I am glad to see the Draft Environmental Impact Statement on the I-81 project is being released. It is an exciting time to move forward with our region’s biggest planning project since the original viaduct was built. Now is the time for all stakeholders and community residents to have their voices fully heard and for all parties to come together to make the best Community Grid possible. I look forward to further collaborative work on local hiring, land use decisions, and quality transportation options.”

Assemblymember Pam Hunter – “The release of the environmental impact statement brings us one step closer to breaking ground on this important project. I am happy to see the community grid as the preferred alternative to the viaduct and look forward to the public comment period getting underway.”

Assemblymember Al Stirpe – “I want to thank the Department of Transportation for taking the time to thoroughly review all the options and for choosing the one that is the best answer for our entire region. I’ve believed for a long time that the Interstate 81 project could be a catalyst for economic growth for our region, and I advocated for the community grid option because I know it will reinvigorate our city center and reunite Syracuse. That will be good for all of Central New York.”

Syracuse Mayor Ben Walsh – “The world is watching Syracuse to see how transportation projects can strengthen communities and create opportunity for people. With the release of the DEIS, we are one step closer to showing them. The DEIS confirms that the Community Grid is the best alternative to replace the Interstate 81 Viaduct and generate positive transformation. The comprehensive evaluation resolves many of the concerns raised about the Community Grid. Now, we need to work together as a City and a region to address any remaining challenges and issues. I commend Governor Cuomo, the New York State Department of Transportation and the Federal Highway Administration on their work for the people of New York State and look forward to working with them on the next stages of this project. I urge approval of the Bipartisan Infrastructure Bill being considered in Washington. Its provisions will help Syracuse fully realize the opportunities this once-in-a-generation project presents.”

In June, Governor Cuomo announced the launch of “Workforce Forward: Syracuse,” a collaborative $1 million initiative spearheaded by the State Labor Department, the State Department of Transportation and other agencies to help ensure that workers in the Syracuse area benefit from the long-awaited Interstate 81 viaduct removal and other infrastructure projects in Central New York.

More information on the project including the newly-released DEIS is available here.