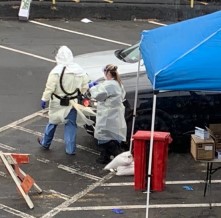 Governor Andrew M. Cuomo on January 9th announced that three additional cases of the UK strain of the COVID-19 virus have been identified in New York. Two of the cases are connected to the initial discovery of the UK strain identified in Saratoga Springs last week, while a third case, unrelated to the Saratoga Springs exposures, has been traced back to an individual living in Massapequa, Nassau County. The cases were sequenced through Department of Health’s Wadsworth laboratory which has analyzed more than 2,200 viral sequences as part of the state’s UK strain testing program.

“The UK strain is here, it is real, and the Usain Bolt-like speed through which it spreads is nothing short of frightening,” Governor Cuomo said. “There’s no mystery as to how it got here – it got on a plane and flew here from Europe, just like the original strain did. Yet, the federal government continues to refuse to learn from the spring and mandate testing for all international travelers. Their failure to act means the rest of us need to be that much more vigilant in our work to stop the spread, as well as do all we can to accelerate the distribution of the vaccine. In the meantime, Wadsworth Lab will continue to aggressively sequence samples from around the state, so that any more instances of the UK strain can be identified, and immediately contained and contact traced.”

Following the initial identification of the UK strain associated with an employee at a jewelry store in Saratoga Springs, Saratoga County, Wadsworth Laboratory sequenced the virus from five additional employees from the jewelry store who had tested positive for COVID-19. After sequencing, Wadsworth can confirm that the UK strain was present in two of those individuals.

The Department of Health conducted free COVID-19 testing this week for anyone who may have had an exposure related to the Saratoga case.  More than 400 people were tested and the Wadsworth Center is screening all positive cases for the UK variant.

Separate from the Saratoga Springs cases, a third case was identified in Massapequa, Nassau County. In this case, a man in his 60’s has been identified as having the UK strain after first testing positive for COVID-19 on December 27. Wadsworth received this sample from BioReference following the Department of Health’s call to labs across the state requesting samples which could be analyzed for the UK strain. The Department is working with contact tracers in Nassau County to identify additional potential exposures.

New York State operates a free COVID-19 drive through testing locations at the University at Albany and Jones Beach which are both open seven days a week and will prioritize testing for contacts to the UK variant case as needed.