Video of the Governor’s remarks is available on YouTube here and in TV quality (h.264, mp4) format here.

Today is day 326, but in many ways today is like day one. Interestingly, today is the one year anniversary of the first case being found in the United States, first COVID case. One year ago today, it was in Seattle, Washington and today, one year later, it’s like day one because we start with a new president, President Joe Biden, and it thrills me to say President Joe Biden and Vice President Kamala Harris. I’m very excited about the president and the change for this nation. This is going to be a different country. It’s going to be a country that needs healing, needs direction, needs a new agenda, but Joe Biden is the right person, I believe, for this time. I have known him many, many years. He’s been a great friend to me personally and I’ve tried to be a great friend to him. Good days and bad days, he’s been a great friend to New York State. He’s been with us on many projects that we’ve done, many important milestones here in New York, that he helped make possible when he was vice president. He was, in many ways, our go to person during the Obama administration. If I needed to cut the federal bureaucracy and get something done, the Vice President was always there and his team was always there, and many of his team as vice president are now on his team, obviously, as president. So, it’s exciting. It really is exciting in many ways. 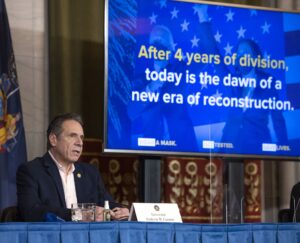 I’m also excited about the rescue plan that he’s laid out. It’s what the nation needs. By the way, it’s what the governors had been arguing for the past year – state and local financing, which is very important. As I said in my budget yesterday, it’s now very important that New York gets its fair share of state and local financing, and we’re going to fight very hard for that, but Joe Biden, to his credit, put it in his plan, $350 billion for state and local financing. Now it will go to the Senate and go to the House, and they will carve up that $350 billion, right, they’ll divide it. What does New York get? What does California get? What does Florida get? What does Texas get? So, we have to make sure in that process that New York is represented, but he put the plan on the table that he said he would. So, all good news and a new day, and a new sense of hope, and a new tone and a new spirit. A more loving, more healing and uniting presence in Washington. And the president sets the tone, you know, the president is not just another person on Twitter. Normally, people look to the president; people listen to the president. The president is a leader and a tone setter and when he is strong enough to use words like “love,” like “healing,” that’s a special person, because it’s hard to show your soul in that way. It’s hard to be that honest and that authentic, and that’s who Joe Biden is.