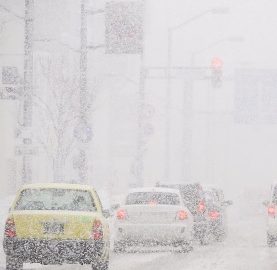 Finally, the Governor is continuing to urge New Yorkers to avoid travel due to the dangerous situations this storm could create on New York’s roadways and rail lines. The Port Authority will be suspending PATH service at 3 p.m. The MTA above-ground service will be as follows: New York City Transit will suspend above-ground service at 2 p.m. Staten Island Railway will continue to operate at this time. The Long Island Rail Road will suspend service between approximately 2:30 to 3:30 p.m., with the last trains departing from Penn Station and Atlantic Terminal. Metro-North will suspend service around 3:00 p.m., with the last trains departing Grand Central Terminal. Additionally, empty and tandem trailers have already been banned on MTA bridges and tunnels, Port Authority bridges, and on a number of other roads throughout downstate New York. A number of major roadways including the Long Island Expressway, I-84 and various parkways could also face travel bans if snowfall rates reach the expected two to three inch per hour rate. 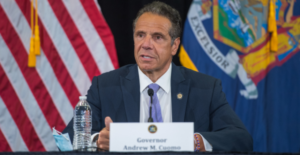 “This storm is creating very dangerous travel conditions throughout much of the state, making it critically important that New Yorkers stay home and stay off the roads,” Governor Cuomo said. “Forecasts are projecting that the snowfall rate could reach two inches per hour this afternoon, and when that happens, it makes it extremely difficult for plows to keep up, especially with other vehicles on the road. Our crews and emergency responders are already hard at work and are fully prepared to help any locality in need of assistance. This storm is nothing to mess around with so again, please stay off the roads, keep a close eye on your local weather, and check in with neighbors and loved ones to ensure they are safe.”

The storm, which has already begun producing snow downstate overnight, is expected to be a long-duration event with snow spreading northward today into tonight and continuing for some places through Wednesday morning, especially parts of the North Country, Southern Tier and Central New York.  The highest snow totals are expected in the New York City, Long Island, and Mid-Hudson Regions, where some places could see up to two feet of snow by Tuesday morning.  Other locations in the Capital Region, Central NY, Mohawk Valley and Southern Tier should see up to a foot of snow or more by late Tuesday evening. 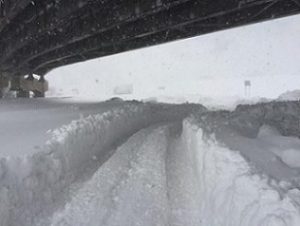 Snowfall rates are expected to increase to 1 to 3 inches per hour later this afternoon as the storm progresses northward.  Wind gusts could reach 50 mph or more on Long Island, especially eastern Long Island where 60 mph wind gusts could occur, while many places upstate could see up to 40 mph wind gusts.  Blowing and drifting snow will likely cause reduced visibilities and treacherous driving conditions in some places.

Coastal areas of Long Island and Queens could experience multiple rounds of flooding, especially during high tides and in vulnerable, low-lying locations. Current forecasts call for two to three feet of inundation above ground level in low lying, vulnerable areas, particularly this evening, which could result in numerous road closures and cause widespread flooding of low-lying parking lots, parks, lawns and homes/businesses with basements near the waterfront.

For a complete listing of weather watches and warnings in your area, visit your area’s National Weather Service website.

Given the expected impacts the storm will have on New York’s transportation system, short and long tandems remain banned on portions of the New York State Thruway. Specifically, this includes I-87 from the New York City Line to Exit 24 in Albany, as well as on all of I-95 and I-287. Additionally, empty trailers are banned on I-87 between Exit 8 to Exit 21A, on the Berkshire Spur and on the Governor Mario M. Cuomo Bridge. A speed reduction of 45 mph is in place on I-87 between Exit 17 for Newburgh and the NYC line, as well as I-287, I-95 and the Garden State Parkway. The speed on the Gov. Mario M. Cuomo Bridge has been reduced to 35 mph. Similar speed advisories of 45 mph will be employed on State Parkways, Route 17, I-684 and I-84.

Trailer bans have also been implemented on roadways outside of the Thruway system. Currently, empty trailers and tandem trailers are banned on MTA bridges and tunnels, Port Authority bridges, I-84 from Pennsylvania state line to Connecticut state line, on Route 17 East of Binghamton to the New Jersey state line, and on the entire length of I-684.

The New York State Division of Homeland Security and Emergency Services’ Emergency Operations Center remains activated due to the COVID-19 pandemic and will closely monitor weather conditions, coordinate state response operations and remain in contact with localities throughout the duration of the event. State stockpiles are prepared to deploy assets to localities to support any storm-related needs, including pumps, chainsaws, sandbags, generators, cots, blankets and bottled water.

The State Department of Transportation is prepared to respond with 3,645 supervisors and operators available statewide. In addition, to support snow and ice activities in critical areas, a total of 162 staff including: 150 plow truck operators, 4 plow crew supervisors, 2 Equipment Operator Instructors, 4 mechanics, 1 mechanic supervisor and 1 safety officer; 24 plow trucks, 6 snow blowers and 2 mechanic service trucks are being deployed from other regions. They are distributed as follows:

Regional crews are currently engaged in snow and ice preparations. All residency locations will remain staffed for 24/7 operation throughout the duration of the event and priority cleanup operations. All available snow and ice equipment is ready to deploy.

Fleet mechanics in affected areas will be staffing all main residency locations 24/7 to perform repairs and keep trucks on the road. Statewide equipment numbers are as follows:

Currently, there is a ban on empty trailers and tandem trailers on the following roads:

Variable Message Signs and social media are utilized to alert motorists of winter weather conditions on the Thruway.

The Thruway Authority encourages motorists to download its mobile app which is available for free on iPhone and Android devices. The app provides motorists direct access to real-time traffic and navigation assistance while on the go. Motorists can also sign up for TRANSalert e-mails which provide the latest traffic conditions along the Thruway here.

All Tandems, short and long, are currently banned on the New York State Thruway in the following locations:

All empty trailers are also banned on the Governor Mario M. Cuomo Bridge, I-87 between Exit 8 to Exit 21A and the Berkshire Spur.  A speed reduction of 45 mph is in place on I-87 between Exit 17 for Newburgh and the NYC line, as well as I-287, I-95 and the Garden State Parkway. The speed on the Gov. Mario M. Cuomo Bridge has been reduced to 35 mph. Similar speed advisories of 45 mph will be employed on State Parkways, Route 17, I-684 and I-84.

DEC Environmental Conservation Police Officers, Forest Rangers, Emergency Management staff, and regional staff are on alert and monitoring the developing situation and actively patrolling areas and infrastructure likely to be impacted by severe weather.  Available assets, such as snowmobiles and ATVs, are strategically positioned throughout the most heavily impacted area to assist with any emergency response.

New York State Park Police and park personnel are on alert and closely monitoring weather conditions and impacts. State Park Police snowmobile units and park Sawyer crews are prepared to assist in the storm response. Park visitors should check parks.ny.gov or call their local park office for the latest updates regarding park hours, openings and closings.

New York’s utilities have approximately 6,000 workers available to engage in damage assessment, response and restoration efforts across New York State. Department of Public Service staff will track the utilities’ work throughout the storm event and will ensure the utilities shift the appropriate staffing to the regions anticipated to experience the greatest impact.

The New York Power Authority and the Canal Corporation staff has performed preparations for the forecasted weather to ensure all facilities, assets and equipment are secured and ready. The Power Authority is prepared to support power restoration activities if needed.

State Police are prepared to deploy additional Troopers as needed to affected areas. All State Police specialized vehicles, including four-wheel drive vehicles, snowmobiles and Utility Task Vehicles, are staged and ready for immediate response. All Troop emergency power and communications equipment has been tested.

With the anticipated high accumulation of snow, combined with high winds and coastal flooding, the Port Authority urges everyone to avoid unnecessary travel across the region to keep roadways clear for emergency vehicles and snow removal.  The vast majority of flights into and out of Port Authority airports have already been canceled for today. Travelers through the Port Authority’s airports should check directly with their airline for the latest information on delays, cancelations, and rebookings. Bus carriers operating out of the Port Authority Bus Terminal have also suspended operations today. Travelers should check with bus carriers for updates and rebookings. Due to high winds, all empty tractor trailers, tandem trailers, motorcycles and house trailers are banned on the George Washington Bridge and the agency’s Staten Island bridges. The South Walk on the George Washington Bridge, the shared use path at the Bayonne Bridge, and the shared use path at the Goethals Bridge are closed and will remain closed for the duration of the storm. Starting at 3pm, all PATH service system wide will be suspended. Riders should adjust travel plans accordingly and use caution as they enter and exit PATH stations. As conditions change across the region, customers are encouraged to check for updates on Port Authority facilities’ social media, sign up for PA alerts, or download one of the PA mobile apps for the latest information about Port Authority facilities.

Some of the most important tips for safe driving include:

The leading cause of death and injuries during winter storms is transportation accidents.  Before getting behind the wheel, make sure that your vehicle is clear of ice and snow; good vision is key to good driving. Plan your stops and keep more distance between cars. Be extra alert and remember that snowdrifts can hide smaller children. Always match your speed to the road and weather conditions.

It is important for motorists on all roads to note that snowplows travel at speeds up to 35 mph, which in many cases is lower than the posted speed limit, to ensure that salt being dispersed stays in the driving lanes and does not scatter off the roadways. Oftentimes on interstate highways, snowplows will operate side by side, as this is the most efficient and safe way to clear several lanes at one time.

Motorists and pedestrians should also keep in mind that snowplow drivers have limited lines of sight, and the size and weight of snowplows can make it very difficult to maneuver and stop quickly. Snow blowing from behind the plow can severely reduce visibility or cause whiteout conditions. Motorists should not attempt to pass snowplows or follow too closely. The safest place for motorists to drive is well behind the snowplows where the roadway is clear and salted.

Have disaster supplies on hand, including:

For more safety tips for all types of weather events, visit the DHSES website at www.dhses.ny.gov/oem/safety-info/index.cfm.