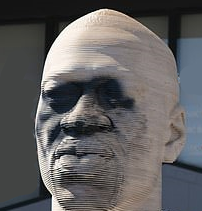 “New York’s new monument to George Floyd, which was unveiled in Brooklyn just this past weekend, on Juneteenth, is more than just a memorial for a father, a son, and a friend — it’s a testament to the grief, anger, and righteous energy that his murder sparked, in our state and across the country. It’s a beacon for all who believe progress is possible, and in our ability to make it happen.

“I am directing the New York State Police Hates Crimes Task Force to offer their assistance in the investigation of this incident.

“And to the group of neo-Nazis who did this, I want to be absolutely clear: get the hell out of our state.”